What Are Your Ambitions, Dear? 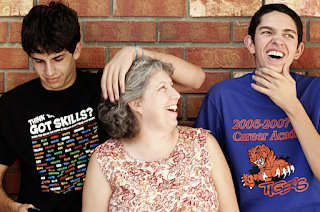 Because of my teen daughters’ social circles, I know more kids every year – my girls’ friends, others in our local homeschool association, relatives, kids at church – who are graduating high school. And, just as when I was a classroom teacher at the high school level, I enjoy talking with these young people about their hopes and dreams.

I’ve learned not to ask a very common but extremely presumptuous question – “Where are you going to college?” – because I’ve been witnessing how many of today’s youth, after having given very careful consideration to all the options set before them, have wisely decided upon totally viable, alternative paths. So, I used to default to another, broader and more inclusive question: “What are you doing after graduation?”

But I recently heard an even better query – a simple but profound semantic twist that shows how much words matter in setting a tone. In the exchange I observed, a wise older woman asked a teen girl, "So, what are your ambitions, dear?"

This wording was incredible! First, it was optimistic, communicating the woman’s belief that the teen did, indeed, have life goals. Second, it was open-ended, creating an opportunity for the teen to expound upon her real hopes and dreams instead of feeling boxed in by preconceived expectations. Third, it opened the door to real relationship – an authentic conversation where the teen could feel safe being transparent, knowing the adult was genuinely interested and not just making “small talk.”

I don’t put teenagers on a pedestal; I know they have very real struggles, individually and as a social cohort. But I discovered long ago – even before I had my own children – that kids almost always respond well to positive feedback. In other words, if they sense that we believe in them, they’ll usually attempt to rise to the occasion. And when they try, they almost always make it.

They also need to know that we see and accept each one’s individuality. That we don’t view them as cookie-cutter products on an assembly line, all required to do the same things in the same way. That we celebrate the diversity of paths to happy, functional adulthood this generation is discovering.

Some of the teens I know aren’t quite sure of their post-high school ambitions. But those who have ideas are gloriously all over the map – as wannabe missionaries, graphic artists, nurses, interior designers, professional nannies, homeschool moms, music producers, small business owners, and computer programmers, just to name a few. And they’ve thought through the ways – some conventional and some very “out of the box” – in which they can reach their goals. I believe we need to encourage them to pursue those ambitions, providing enough guidance and support on the one hand while letting them freely explore their options on the other.

What are the ambitions of the kids in your life?