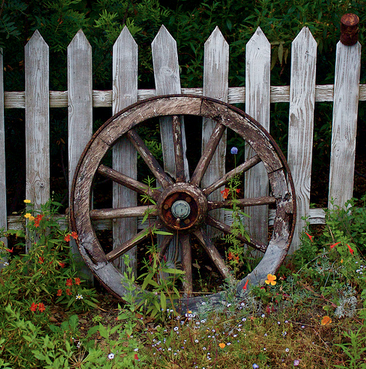 For several years now with my daughters, I’ve used an analogy similar to the wheel-and-spokes illustration Kathy shares in Chapter 4 of Screens and Teens.

As professing Christ-followers, we’ve discussed the importance of keeping Jesus at the hub of the wheel representing each of our lives, emphasizing that everything else - our gifts and talents, preferences, thoughts and actions, relationships – should properly remain as spokes in the wheel. Each spoke needs to be connected to and dependent on the hub for the wheel to function properly, and we can’t try to put any particular spoke in the hub’s rightful place. We’ve noted that lots of people like having God as a spoke but that few purpose to keep Him at the hub. We’ve also realized with chagrin how quickly the wheels of our lives fall out of alignment when we aren’t mindful, because we then end up letting God unconsciously slip from hub to spoke. And, of course, it’s painfully true that allowing anything but God to be at the hub promotes an unhealthy self-focus.

For some – folks of any age, but maybe especially young people, who have often not known life without it – use and overuse of technology can slip into that hub role and/or cause something other than God – friends, celebrities, games – to usurp His rightful position. After all, as Kathy points out, we can manipulate technology to “be about only what we like and want.” So it can easily contribute to selfish narcissism.

Obviously, technology is not inherently bad; it’s simply a tool. But, as with any potentially dangerous tool, we must be judicious in its use. And in the case of technology, I still believe – as I did several years ago when I started seeing more and more parents allowing their kids to use more and more technology at younger and younger ages – that setting boundaries and limits is the best way to temper the potential pitfalls.

I asked my daughters about this the other day. I’m sure they’d be excited if my husband and I got them smart phones for their upcoming birthdays and iPads “just because.” After all, they’re teenagers. So, though most of their friends happen to have technology limits similar to the ones we’ve set, they know they’re “different” because many of their peers are steeped in technology night and day. However, they both readily replied that they know the limits we’ve set for them are for their good.

Creating and maintaining limits on our kids’ use of technology is like putting a fence at the edge of a cliff overlooking a pristine, mirror-like pond. Any curious child will want to gaze into the pond, which, of course, shows him his own reflection in sharp detail. But if he gets caught up in looking for too long or leans over too far, he’ll forget where he is and tumble over the cliff to his doom. So the fence enables him to get appropriate glimpses from a safe vantage point while also providing the boundary he needs.

Though I might be mixing metaphors too much, I think it’s safe to say that good fences make for well-aligned wheels. So…how are the wheels and fence in your house today?