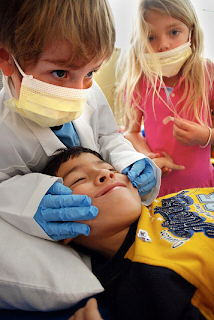 “What do you want to be when you grow up?”

Well-meaning relatives and friendly strangers at the grocery store ask children this all the time, but it bothers me. For one thing, it puts kids on the spot. Some young children have ready-made answers: astronaut, movie star, ninja. But many older kids panic because they don’t know what to say. They understand that most of their preschool dream jobs are unrealistic, but they don’t know enough about the world of work to give logical, satisfying answers. Furthermore, the question communicates that the goal of life is to “grow up,” discounting the value of childhood. But, as we talked about last time, we really should allow kids to be kids instead of rushing them toward premature adulthood.

There’s no doubt that our jobs create part of our identities, and that’s okay. But the question as worded suggests in a subtle way that what we do for a living is who we are as humans – especially because it’s almost always the only question posed in a casual interaction and the first thing asked in a longer conversation. We also answer it with “I am” statements (“What do you do?” “I’m a teacher.”). And we judge people’s worth based on their answers. Think about it. In all honesty, how would you view a child who said she wants to “be” a doctor? What if she said soldier? garbage collector? at-home mom?

The question is meant as a harmless nicety among new acquaintances, and we can’t stop people from asking. But, given that our kids will encounter many situations throughout their lives in which they’ll be encouraged to evaluate who they are based on what they do, we need to make conscious, regular (daily!) efforts to communicate to them that they are valuable simply for be-ing, not primarily for things they can do. We are, after all, human beings, not human doings, and the kids in our lives desperately need to know and embrace that truth.

This is exactly what I wish to impress upon my kids {and others}. Thank you!