My Biggest Mistake as a Homeschool Mom 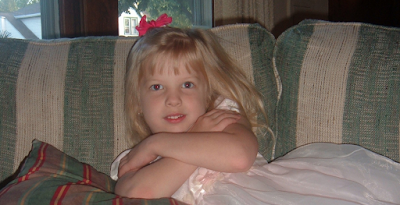 I often say we've been homeschooling "from the beginning" - meaning from the moment each of my children was born - because I know that all of life is learning. Thus, I was as much a homeschool mom when my girls were toddlers as I am now that they're 10 and 11...and as I will be when they're 16 and 17. The content changes over time, but it's all learning in an independent, home-based environment directed by me. Thus, it's all homeschooling.

That said, my state mandates that compulsory "school" attendance begin the year a child turns six before September 1. So, by that definition, I've been an "official homeschooler" since I filed my first legally-required annual notification in the fall of 2007.

My biggest mistake as a homeschool mom, though, began in May, 2006, stemming from my propensity to be an overachiever. Well, that and my former inclination toward people-pleasing.

I'd done well with not pushing early academics when the girls were preschoolers. I did explore different preschool "curriculum" programs, but not because I felt I had to do anything formal; instead, I just wanted to find some age-appropriate activities to guide me - a former middle and high school teacher who knew little about education for younger kids - and to lend a bit of structure to our days. In truth, though, preschool around here mainly consisted of lots of read-alouds, continual discussion about what we read and saw, some theme-based arts and crafts, occasional outings, and lots of time to play with toys - both of the official "educational" variety (i.e., puzzles and shape sorters) and also good ol' "regular" toys like Barbies and Little People.

You see, though I didn't legally need to do anything formal for more than a year, I of course knew that many kids start "kindergarten" when they turn five. And I realize now, in hindsight, that I was nervous about what people would say if my kids appeared to be "behind" their same-aged peers. Add to that my knowledge that the kids in many local homeschool families I respected were "advanced" and my own academic background - I was shoved into kindergarten when I was still four and ended up as valedictorian of my high school class and a magna cum laude college graduate - and it's no wonder I fell into the trap.

Yes, I pushed...an admission which still drives me to tears of deep regret more than six years later.

Thankfully, I had enough wherewithal to avoid the most overly rigorous formal kindergarten programs - and the curriculum I did choose included some good elements appropriate for four- and five-year olds: gentle, hands-on math instruction...some engaging history stories...fun Bible- and history-themed songs complete with hand motions and other actions...regular art projects. And - though I now realize how wholly unnecessary it was at that point - Rachel (and Abigail) enjoyed and could manage the handwriting program I chose.

But then there was phonics. And, of course, I knew that the ability to read well is the crux of everything when it comes to education, whether we're talking literature, chemistry, or Bible study. So I purchased an expensive, systematic program and set out to get both girls reading as soon as possible.

Set aside for a moment that I thought I needed to formally teach phonics to a four-year old; that's a story for a different time, but not my biggest mistake because I figured out my error with Abigail pretty quickly and backed off with her. No, my biggest mistake was continuing to push Rachel with phonics even after I got a clue with Abigail...simply because she was five, and that's what I was "supposed to do."

Never mind what would have been best for Rachel: at minimum, radically modifying how I used the pricey program or, at best, setting it (and all formal phonics instruction) aside for a time while I researched materials better suited to her learning style and watched her for true readiness. Nope, I had a job to do - a job I thought required me to try making my child fit into the lesson plans regardless of her actual, demonstrated readiness and learning needs.

The time we spent on reading lessons was dreadful. Rachel struggled; she tried so hard, but she couldn't recall the individual phonemes the way the program said she was "supposed to," and she really got stuck on consonant blends. In response, I tensed up...every.single.day. And I yelled at her. Yes, I yelled at my little girl simply because remembering the connections between letters and sounds was tricky for her at that time, using that method.

I'm so ashamed to admit that. But I do it with the hope that my transparency will wake up even just one new homeschool mom who thinks right now that the curriculum trumps her child's real needs. And I won't mince words: It is just a bald-faced lie that you "must" start formal instruction of any particular content area at a certain age just because "everyone else is doing it," or that you "must" go at a certain pace so the child masters a set amount of content on anyone else's timetable. The institutional schools do what they do, but that doesn't make it right...and it most certainly doesn't mean that we who home-educate need to follow suit. Instead, we need to be wise enough to figure out the actual readiness level of each of our children and courageous enough to use that knowledge as our guiding force in planning an individualized course of formal academics.

God was incredibly gracious to this foolish homeschool mom. First and foremost, He protected my daughter's heart from her momma's stressed-out scolding so that - miraculously - she still loves me, respects me, and wants to learn from and with me. I don't deserve any of that. Second, He woke me up to the error of my ways - to my sin against my daughter - before I'd done too much damage to her sense of competence. And, finally, He enabled her to learn to read and gave her a joy for it despite all the pressure I put on her. By all rights, she should either hate reading or feel "paralyzed" by the thought of it...but, instead, I often find her head in a book, and her skills are solid.

However, just because we got "lucky" doesn't justify what I did. It did work out in the end, but it was despite what I did, not because of it. Rachel's road to becoming a competent, confident reader was much bumpier than it needed to be. And the fact remains that my pushing could have done serious, serious damage to her soul and to our relationship - not to mention to her desire and ability to learn. That happens every single day in institutional schools -  where children are grouped with same-aged peers regardless of each one's actual readiness and are expected to perform according to the cookie-cutter model of the system - and homeschools are not immune to it.

So I implore you, new homeschool mom, to learn from my mistake - and from others, such as this mom, who had to learn the same lesson. Some children are actually ready to learn to read at an early age - we've probably all heard of a three-year old who picked up a copy of The Boxcar Children and devoured it in a day - but that's not the norm and should not be our standard. Neither should we assume that kids need to read by age five simply because the institutional schools continue to promote "academic pushdown" (i.e., teaching what was once considered first grade material in kindergarten...or even K4). There is an agenda behind that practice, and it has nothing to do with what's actually best for kids. If you don't believe me, maybe a brilliant video produced by Yale University will convince you: Gesell Institute of Human Development.

I'm not saying that five-year olds should not learn anything about phonics - or other formal academic content. I am saying, though, that we homeschool moms shouldn't fall prey to the lie that there is one right timetable or one correct method for every child - when it comes to learning to read or anything else. And I am saying that, no matter the pressure we get from family, friends, and educational "experts" in the government schools or the "performance anxiety" we feel within ourselves, "better late than early" and allowing our young children to primarily learn through a wide variety of play activities is best in most cases. The bottom line is that we have a responsibility to really know each of our children - in terms of readiness and preferred learning style - and to do what's right for each one on an individual basis instead of caving to fear and outside pressure.

Trust me on that one so you don't have my regrets down the road.