Father's Day was hard for me when I was first married. We didn't have children for several years, so Father's Day served only to remind me of my fractured relationship with my dad and the inability to reconcile since he'd died of a heart attack while we were estranged. I knew the boundaries I'd set had been necessary - for my own health and as an attempt to prompt him toward repentance of his behavior toward me in my childhood - and that it wasn't my fault that he'd chosen to remain at odds with me until his sudden death. But I didn't feel right thinking of happy times with him once I'd come to acknowledge the reality of what he'd done to me. And I didn't want to think of the twisted aspect of our relationship. So I simply felt alternately bitter and numb during Father's Day recognition services at church. In fact, I often scoffed internally when one pastor or another would say, "And for the fatherless - or those with troubled relationships with their fathers - remember that God is your Abba Father. He's all you need." "Easy for him to say," I'd retort to myself. "He probably has a good father."

When our girls were born, my focus shifted to my husband - my daughters' dad - as I found ways to celebrate his sweet relationships with them; he has always been enamored of his girls in just the right way. So my heart softened toward the day because I could naturally focus on something positive instead of having to fight my emotional demons.

And along the way, my desire to see myself as God's daughter has increased. I still struggle with the fact that I might not be able to see my dad on Father's Day even if he were alive - that would be contingent on whether or not the relationship had healed, a move I hadn't been able to hold out much hope for before he died. And I hate that the happy memories I do have are marred by the ugly reality of his sin against me. It just doesn't seem fair that I don't have an earthly dad to celebrate on this day...and that I cannot even feel right about celebrating his memory. God, of course, loves me far more than even the healthiest, most loving earthly father ever could...but He is Spirit - not here physically and not the subject of the same kinds of concrete childhood memories my husband, daughters, and friends have of their dads.  So it's hard in some ways to find comfort in that.

The difference in me now, though, is that I'm willing to open myself up to Him as my Abba Father. Instead of scoffing at a pastor's attempt at comfort, I now long to embrace the amazing truth that He is, indeed, everything I've ever wanted in a dad...and then some. I have to consciously make that choice each year on Father's Day - and on other occasions as well - but now, at least, I want to do that. And one day I'll see Him face to face and know His deep, abiding love in every fiber of my being.

When I was little and trying to absorb the reality of what my father had done to me, I made up a story that comforted me greatly. I told myself that I didn't really belong to the parents I lived with; instead, my real father was out there looking for me and would someday come for me. And he was a king. So, when he found me, he'd swoop me up and set me beside himself in the most ornate carriage anyone had ever seen and whisk me away to my new home: his magnificent castle on a majestic hill.

I've known for a long time now that the Lord put that vision in my mind and heart to give me hope in my painful situation. And He, of course, is my Real Father - the King of kings who has been preparing a mansion for me since Jesus returned to Him...which, after 2,000 years, must be quite the manse! So I try to keep my focus there even - especially - when it's hard to feel good about how things are here. One day I'm going to have the most marvelous Father's Day celebration ever...and it'll last for eternity. 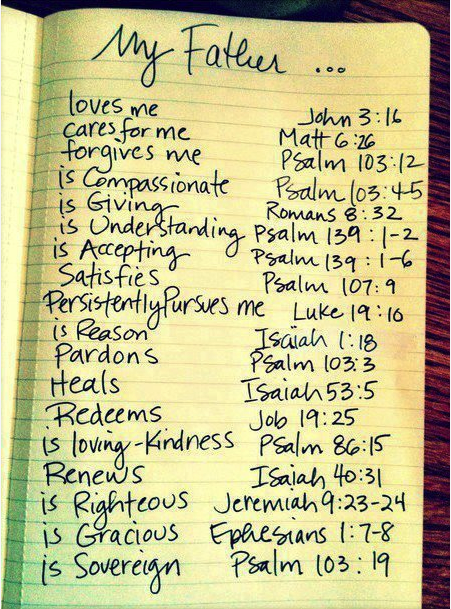