I've been married for a long time (!) and am Momma to three girls: Anna Vivian - who is with Jesus but who is still, nonetheless, a very real part of our family - and our "Irish twins," Rachel and Abigail, who will soon turn 11 and 10, respectively. Before being blessed with my girls, I served as a missionary to the public schools (i.e., I was a classroom teacher), but am now passionate about the call God has given me to be an at-home mom and homeschool educator. 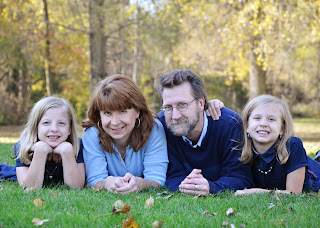 To help financially, I've also provided in-home childcare for several years; I currently have a five-year old, her 13-month old sister, and another (10-week old) baby. That's worked out pretty well over the years, as I basically operate as if the little ones are part of my own "full quiver." But there's no doubt about it: At the end of the day - any day - I am tired!

So I must acknowledge my great dismay about a year ago, when Rachel - who has always been a rather light sleeper - developed anxiety-induced insomnia. And it was even more upsetting that the only salve for her angst was for me - not my husband - to lay down with her as she dozed off. Admittedly, I didn't handle this very maturely; in fact, it's safe to say I threw more than one spiritual temper tantrum: "Come on, God! It's not like the child doesn't see me during the day. In fact, I'm with her all.day.long! I am so tired; I just want a little of my own time at night!"
To make matters worse, I sometimes vented these feelings to Rachel herself. Not every night, but more often than I really want to admit, I stomped upstairs to implore her: "I've taught you a boatload of relaxation techniques, including talking to Jesus. Can't you just get to sleep by yourself for a change?" And I'm sure she sensed my exasperated body language even when I didn't speak with words.

For a while, things seemed to get better, and I thought the "phase" had passed. But it came roaring back a couple months ago. In fact, the intensity of her anxiety and the nightly length of her insomnia seemed far greater than before. And one night my frustration spilled over again, such that I actually spent well over half an hour - starting at midnight! - scolding her as she sobbed. Sadly, in the midst of my rant, I even said, "You're going to have to figure out what you need to make this stop. I can't do it anymore!"

By the light of day the next morning, I felt horrible for my rant, so I pulled her aside and confessed my sins of selfishness and anger. Always quick to forgive, she hugged me tightly and we cried together. And then she said, "I thought about what you said, and I think I know what would help. If you pray with me when you come up, I think that's what I need."

We do pray together several times each day, and my husband prays with both girls as he does their usual bedtime routine. So I'd never considered that I ought to pray with Rachel again during my nightly check-in with her. But she was right: She needed specific prayer asking the Lord to calm her heart and mind. And she apparently needed it to come from her momma.

So we altered our routine. Instead of just laying with her - trying to calm her in my strength - I began to pray for her each night, asking the Lord to be her strength and her peace. I also specifically pray in Jesus' name that satan will be bound from her, because I quickly realized the issue could, at times, be spiritual warfare. Lo and behold, Rachel noticeably calmed immediately after our first nights' prayers, such that I was able to leave after just a few minutes instead of having to stay for a prolonged time. And she got to sleep very quickly every night for a couple of weeks!

She still has occasional rough nights, but now they occur once or twice a month instead of four or five times a week. And I've been able to use those opportunities to remind her that God is not a genie - so that, if He chooses to withhold sleep for a time on some nights, He has a reason for it. She's not always happy with that answer, but she understands about His sovereignty and has even thought through possible reasons why He wants her awake at times. So, when that happens, she is much less prone to get overly anxious, and she even seeks Him out herself after I've left.

I still sometimes feel selfish about my time, but, honestly, our simple nightly prayer time has changed my perspective on the whole thing, too. First, God used it to demonstrate again how bonded my daughter is to me - a cherished truth because I'm the product of a dysfunctional home where my mother virtually ignored me. Second, I've seen clearly that He intends me to be Jesus' arms for my girl when she needs comfort. In other words, it's not enough to implore a child to "talk to Jesus;" most need a physical connection with Him, and that's the part we provide. Finally, my faith has been strengthened as I've witnessed His provision for Rachel through our prayers.

In fact, our nightly time together has morphed from something I dreaded to one of my favorite times of day with her. Now we sometimes talk about an issue that bothered her during the day, and I'll include prayer for that as well. Or she asks deep questions about the ways of the world or God's character. So we have incredibly meaningful conversations that don't seem to happen during the day, despite the fact that we're together all the time. Sometimes our new chat-and-pray routine lasts for just 10 to 15 minutes; other times, it's much longer.

Now, especially if we've had several consecutive longer conversations or if Rachel has a hard night and needs me to stay later than usual, I still sometimes struggle with feeling selfish about my time. In fact, I know it's important for me - and any full-time mom - to have alone-time on a regular basis, so it's not wrong to crave that and ask the Lord to provide it. But the difference for me lately - instituted only since I listened to the wisdom God imparted to a tired, sad 10-year old girl - is that I am more at peace with trusting Him for that time instead of grasping for it myself.

I hope and pray that my time with Rachel each night is part of her process of growing closer to Jesus; in fact, I'm recalling conversations from years ago with older moms about the importance of that late-night mother-daughter time, so I'm confident it's a very good thing for Rachel. Not only for her, though, as I also know without a doubt that it's been a significant part of my spiritual walk lately, too. This nighttime discipling is, in fact, for both of us.