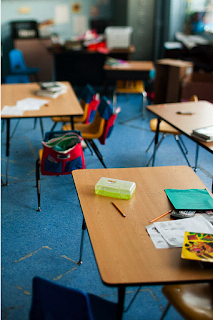 I recently spoke with a friend who teaches fourth grade-aged children. When asked about his experiences this school year, he mentioned an otherwise “nice” girl who apparently has a fair amount of trouble paying attention in class.

He’s clearly still trying to “figure her out,” so I said, “Do you think it’s something other than ADHD or a learning disability? Maybe she’s very picture-smart, so she’s ‘daydreaming’ when she should be focusing.”

His eyes widened. Though the man knows multiple intelligence theory, it was as if he’d never entertained this possibility. But after a second, he said, “Well, she still needs to pay attention. She’s missing a lot.”

And that’s true; for her own sake in a classroom setting, she must find ways to focus. But it’s interesting that a conscientious, experienced teacher had presumed the existence of learning problems or attention deficit disorder before even thinking of multiple intelligence issues. Sadly, he first inclined toward labeling possible weaknesses rather than considering intelligence strengths.

But what if the student’s picture-smart strength really is causing her classroom behavioral struggle? Then she doesn’t need Ritalin or special ed. testing; she simply needs strategies and methods to harness her innate wiring.

My friend said he’d put a special sticker on the corner of the girl’s desk, in hopes that seeing it will remind her to focus. For a picture-smart child, that’s a good start, but he can do more. For example, when he’s in “lecture-mode,” he can display relevant photos for this girl and other picture-smart kids, who will thus be much more apt to focus on the topic at hand. And he can allow and encourage picture-smart kids to doodle or even color while listening. That’s counterintuitive to some of us, but it honestly does help; I’ve seen it in my own kids. He can also regularly incorporate tasks that allow kids to demonstrate understanding through diagrams and illustrations. For example, my high school biology teacher awarded equal credit for well-written reports and well-done scientific drawings because he knew that both demonstrated actual student learning equally well.

Of course, classroom teachers may – with their own "comfort" in mind – insist that every child do the same tasks in the same way. However, those who desire to help young people maximize their potential realize it’s healthier to consider how kids are actually wired. As an added bonus, such practices also ameliorate many behavior issues, making everyone’s classroom experience that much more positive.