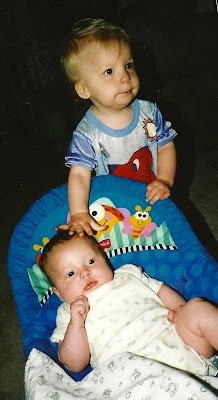 I didn’t get pregnant until I’d been married for over 10 years. We didn’t struggle with infertility. We waited on purpose, and I worked as a classroom teacher during those years. But we didn’t delay because I wanted a career. I was just afraid.

Not of pregnancy, or of the possibility of never-to-be-lost baby weight. No, I was petrified that I’d be a horrible mom.

You see, I carried a lot of generational baggage. My maternal grandfather threw himself off a building when my mother was eleven. As a result, she and her mother and older sister struggled emotionally for the rest of their lives.

While in high school, my mother met my father. I don’t know how he wooed her, but they married just a few months after her high school graduation. And it wasn’t long before he showed his true colors. He behaved perversely (eventually sexually abusing me), taunted her about being “stupid” because school had been a challenge, and made no bones about the fact he’d actually wanted to marry someone else.

To be fair, his sins can be traced to growing up with an alcoholic father and other family dysfunction. In fact, in all likelihood, he was molested as a child, too. But there’s no denying that he emotionally brutalized my mother.

And she took it out on me. She criticized and yelled and occasionally smacked me. But mostly, and worst of all, she ignored me. So I grew up with no emotional bond to her, convinced she hated me.

I came to Christ as a college freshman and sat under solid, biblical teaching in both my campus fellowship and the church I attended at the time. And, shortly before Jeff and I married, I sought counseling help for my emotional scars. But the healing road was long, even after I had an amazing spiritual encounter four years later in which God promised he’d “break the chains” of generational abuse. I clung to that truth intellectually, but still feared the reality of becoming a mom.

Tragically, we miscarried our first daughter, which added another fear into the mix: Could I even carry a child to term? In fact, for a while, I was afraid to try again. But God eventually eased that concern enough and then blessed me with a textbook pregnancy with Rachel, now nearly 11. And then, before I even had time to adjust to my new role, I found myself pregnant again with Abigail, who was born just eleven and half months after her sister.

Even in the busy-ness of caring for “Irish twins,” it didn’t take me long to see two ultimate truths. First, I saw God’s faithfulness. He’d brought me to himself by pursuing me until I understood what Jesus had done for me. And then he started to reshape me into his image – ever so slowly – by imbuing me with his thoughts, priorities, and values. Plus, he’d worked through an unbelievable experience (feel free to ask me about it sometime!) to give me a specific promise, which I knew was from him because the idea of “breaking chains” is absolutely biblical. As a result, I haven’t behaved towards my daughters as my mother did towards me; in fact, my love for them is more intense than I could ever have imagined possible. Despite my baggage, he put it in me to devote myself to them.

But, as [one of our interim pastors] reminded us in early March, we’re all on the road of sanctification – God’s journey of making us like him. And I’ve also seen that motherhood itself is a main way in which he accomplishes that goal in me. Being a mom shines glaring lights on my impatience, my selfishness…and my temper. But motherhood has also been the crucible God needed to refine those traits out of me. They’re not gone – I’m a work in progress just like everyone else. But I’m not like my mother because I’m God’s child now, being remade in his image. And, rather than “fix” me before the births of my children, it’s been through motherhood itself that he’s chosen to work that refining in me.

So, be encouraged. If you belong to the Lord, he’ll give you what you need as a mom. In fact, he’ll use your role as mother to make you more like him, no matter the baggage you’ve brought along. If he can make me fit, he’s more than capable of doing it for you.