The Myth of "Being Behind" 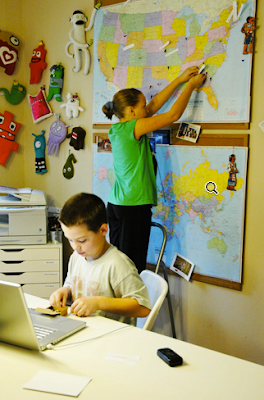 In terms of lies to which homeschooling moms fall prey, the notion that all kids "must" read fluently by age five "or else" is second only to the paralyzing fear among us that our children will somehow fall "behind." If I had a dollar for every time I've heard that concern, I could fund repeated homeschool field trips to Disney and Tahiti!

It breaks my heart that so many committed homeschool parents needlessly lose sleep over this one because, in point of fact, there is simply no such thing as "behind."

Oh, the institutional school system goes to great lengths to convince us otherwise. Individual districts and even whole states set up elaborate, bullet-pointed "standards" lists in every subject area for each "grade level." In addition (and, incidentally, in violation of states' rights as established in the Constitution) the federal government is attempting to establish national "Common Core Standards." Never mind that these "standards" are not based on any actual scientific research about children's brain development or that they keep changing (i.e., that which used to be taught in first grade has now been inexplicably shoved down to kindergarten or even so-called K-4) even though kids are still kids. The establishment has spoken from "on high," proclaiming the necessity of each child reaching certain benchmarks by certain ages, and they've convinced most Americans that they're speaking actual truth.

Tragically, nothing can probably be done to repair the broken system. In fact, the system's bureaucrats won't even acknowledge the presence of a problem, let alone make changes to repair the damage done to kids in the process.

But we who home educate can - and should - do better. For starters, we have to shake off all the shackles of the institutional school mentality - a hard task since nearly all of us were unconsciously indoctrinated into it as kids ourselves. But it is possible. And, for our kids' sakes, it's imperative that we battle against any such biases as we find them seeping into our thoughts.

In terms of this issue of "being behind," we must simply force ourselves to accept the reality that the whole notion is a lie - an artificial construct of the system that serves no good or useful purpose. Instead, we need to remember that God has created each child as a unique, one-of-a-kind miracle. And that truth means that no child should be pigeon-holed into what's "appropriate for grade level" according the (secular) state schools. If you're a Bible-believing Christian, there's simply no other way to look at it; you either believe the world or you believe the Lord, and the two ideas are mutually exclusive so you must choose to live by one or the other.

Of course, embracing God's truth doesn't mean we can slack on our children's education. Not at all. In fact, the responsibility to train up our children is great, and we must take it seriously - and our kids owe it to the Lord to meet their potential as He's decreed. But the process is entirely different from the world's ways.

Instead of what they do, we must diligently study each of our children and then, with all the various skill and knowledge areas (i.e., "subject areas") in mind, ask, "Where is he today?" Of course, in some areas, a child will have a high degree of skill and/or natural talent; other areas will be harder for him. And that's as it should be since God has made each child individually for His purposes and has gifted each one accordingly.

When doing this assessment, it's imperative that you not compare a child to any outside standard or to any other child - and don't say, "Oh, he's at Point A now and I need him to be at Point Z by thus and such a time." Nope, simply make an honest, non-competitive assessment of the child's current level of understanding and skill in each area. And then commit to making diligent progress forward from that place - at the child's pace. Don't push or rush so he can "catch up" (to the system or a sibling); don't hold back so he doesn't get "too far ahead of his peers." Don't worry about the "grade level" designation on a textbook - just use the book that matches his current skill level and move forward from there.

If you do that - starting where your child actually is today, taking things at his pace, and making diligent effort each day - he will end up exactly where the Lord means for him to be when he leaves your nest. You needn't force him to meet some outside, foolish standard. God will simply direct the child's path as an adult, and you'll need to accept His plans instead of trying to mold your child into someone else's image. And how he "rates" compared to someone else will be a moot point. He simply needs to have worked to his potential as an individual. And, if he does that, he simply can't be "behind."