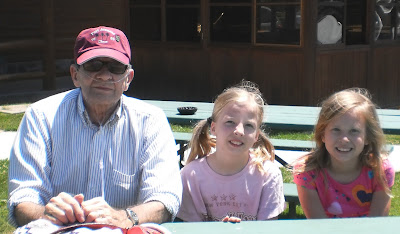 My daughters recently turned nine and 10, and my family and I marked Independence Day earlier this month as we have every year since they were one and two: with my husband’s parents.


It’s a tradition born of necessity, really, after we’d determined the celebration in our hometown to be too big and not sufficiently family-friendly. Yet we wanted to mark our great country’s birthday somehow, so my in-laws suggested we join them. And we had such a good time that we easily decided to make the trip an annual event.

We generally spend one or two overnights with them and enjoy various low-key but fun activities during the day. The first few years, we frequented a nearby playground and, sometimes, the local wading pool. This year, we visited an observation tower with an amazing marsh view before wiling away the afternoon at the local aquatic center. Then, on the evening of the fourth, we always go to the same place: a beautiful amphitheater-style park in a nearby town for an impressive concert and fireworks display…an event made extra-special because of my father-in-law’s “celebrity status” as the concert band’s bass drummer.

The tradition changed this year, though – because, after 45 years of dedicated service, my father-in-law reluctantly retired from the band. Dictated by health concerns rather than an actual desire to hang up his drumsticks, the decision has been understandably hard on him.

We wondered if he’d choose to skip the show, a decision that would have saddened us but which we would have understood. However, he determined to go, a choice that caused my daughters to exclaim, “Yeah! Now we can finally watch with Grandma and Grandpa!”

I observed him tap along to the beat of the Sousa marches and show tunes and laugh with his brother and other relatives. I swelled with pride for him when he stood at attention with other Navy vets during the song honoring service members. And, when the first explosion boomed overhead, my husband, daughters, and I hurried to sit next to him – to watch with him the show he’d never before seen during all those 45 years inside the bandstand. Throughout the evening, he smiled a lot.

I’m proud of my father-in-law for persevering through a very difficult situation in his life. He’s not putting on a mask, pretending he feels fine when he doesn’t. But neither is he giving up. He’s adjusting…and choosing to find joy in new traditions even if he’d still prefer the old. That’s a valuable lesson for anyone of any age.