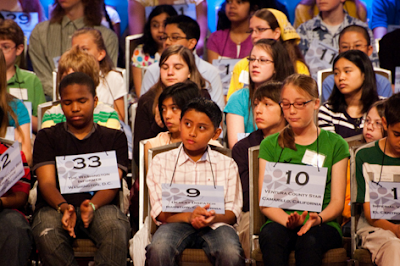 Did you hear about the controversy at this year's Scripp's National Spelling Bee?


Protesters - albeit a mere handful of them - picketed the bee, complaining that the English language is "too complicated," and demanding that our spelling system be simplified. They spoke of all the children who "can't possibly" master the intricacies of the language and carried signs proclaiming, "Enuf Is Enuf!"


No, this wasn't a farce orchestrated by The Onion or Leno's "Jaywalking" crew. These people were serious.


Now, as those who work daily with children learning to spell in English, we all know that our language is tricky, to say the least. As an amalgam of several other languages, its system of rules seems downright ridiculous compared to a more intuitive language such as Spanish, for example (in which all but a few words can actually be spelled phonetically).


We also know that languages change over time. We do not now speak "the king's English" as we did in colonial times; but, then again, neither do the British. The King James Bible - Shakespeare's Bible - can be as difficult to comprehend as the Bard's work itself because our language has changed since that translation. With every new edition of a dictionary, obsolete words are removed and new ones take their places. And changes come from sociological influences as well, so that - for example - dictionaries of American English now contain many words of Spanish origin because of our growing interaction over the past 100 years with Latin American countries.


But none of that means we should actively choose to make wholesale language changes just to help some people gain a false sense of higher self-esteem. That notion reminds me of what I deem a ridiculous policy in recent years that forbids keeping score at Little League and kids' soccer games. Or the ludicrous choice made several years ago in my city and elsewhere to abandon the practice of naming class valedictorians and salutatorians.


Bureaucrats make such decisions in misguided attempts to level the playing field so that no one "feels bad" about himself. In reality, though, such policies simply remove people's motivation to persevere through difficulty and contribute to a growing national tide of accepting mediocrity - the "good enough" - in place of excellence.


In regard to spelling, let's allow the language to develop as it always has – taking naturally-occurring change that comes over time as people's actual usage evolves - rather than cramming through simplification for its own sake. So, if "enough" becomes "enuf" 50 years from now because of texting and other influences, so be it. But heaven forbid we allow even the most well-meaning folks to red-pen the dictionary all in one fell-swoop just because current spelling can be hard.


Instead, let's simply make sure kids know they are valuable and, yes, even smart - whether they are natural spellers or not. Let's lavish praise on their diligent efforts to improve - in spelling and soccer and everything else. And let's introduce more and more teachers to programs like All About Spelling, which actually makes our system comprehensible to even those for whom spelling in English is very difficult. In fact, I daresay that if the Scripp's protesters knew about AAS, they might put away their signs and get to work helping their kids learn to spell in the real world. And who knows? One of those children might very well win the bee a few years down the road.