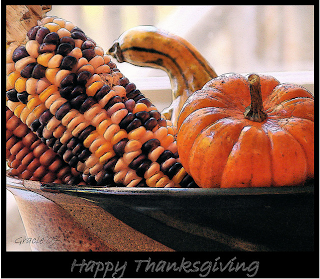 Did you know that the Pilgrims and Wampanoag Indians with whom they marked the first Thanksgiving celebrated for three days? They enjoyed a bountiful feast, during which the Pilgrims unashamedly thanked God - the Triune God of the Bible, not some generic "deity" - for their many blessings. There's no record of the Indians boycotting the prayer or protesting its inclusion; in fact, it's only logical to assume that they joined in with thankfulness of their own, praying according to their own understanding of the spiritual realm at the time. It's also very likely that Squanto, the amazing Patuxet Wamanoag man who helped the Pilgrims and lived out his days in their village, joined in the Pilgrims' prayer - because biographies speak of his conversion to Christianity while in the care of Spanish monks following his kidnapping by Spanish slave traders at the age of 12.

After the meal, Pilgrim and Indian alike enjoyed each other's company, played games, and engaged in various friendly contests, no doubt doing their best to communicate with each other in the process. I can picture Pilgrim and Indian children running freely together in a mixed-up jumble of brown and bisque elbows and knees...men comparing carving knives and seeking out Squanto and Samoset for translation...women admiring each others' babies and keeping a collective motherly eye on all the children while stirring pottage and husking corn.

Am I romanticizing history?

I don't think so. Many current, deconstructionist historians, as well as advocacy groups of various stripes, seek to revise the history of the first Thanksgiving, wanting to neuter the Pilgrims' faith convictions or place an anti-colonialist spin on things. However, the fact of the matter is that the real history is what it is, whether some want to accept it or not. We ought not try to twist and distort it to suit modern cultural mores or exploit current race-based political agendas.

Take the Pilgrims' faith. Everything I've read confirms that they were what some today would refer to as "Bible thumpers." They took their Christian faith very seriously; believed firmly in the Bible as the Word of God and in Jesus as the only way of salvation (John 14.6); and had extremely strong convictions about not practicing the state religion of England at the expense of biblical truth. They were harassed for their beliefs. So they ultimately chose to immigrate - first to Holland and later to what was then referred to as the New World - so they might freely practice biblical faith in Christ.

Like every European at the time, they didn't have a good understanding of the richness of Native American culture; how could they when they'd never met a single Indian and had probably only heard a few merchants' stories? And, because their faith convictions ran so deeply, they were interested in sharing the Good News about Jesus with the Native peoples - the same as devout followers of any faith want to do today. However, there is no evidence that they were racist or forced their views on the Indians. In fact, William Bradford made a treaty with Massasoit, the Wampanoag chief, an agreement which brought 50 years of peace and understanding between the two groups. Were there later conflicts? To be sure...but that went both ways, and the original Pilgrims can hardly be held responsible for the admitted atrocities of later settlers (and Indians). The Pilgrims themselves had noble motivations, and we ought not denigrate that just because some who came later were sometimes ignoble.

I'm greatly dismayed that my children's peers who attend government-financed schools tend now either to hear a version of the Thanksgiving story clouded by the modern misrepresentations that run rampant - or learn nothing at all except that it's "turkey day." Even Atheist, Hindu, and Muslim Americans can honor the Pilgrims as examples of ingenuity, grit, and commitment; doing so would not equal accepting Jesus as Lord just because that's what the Pilgrims believed. Likewise, we can celebrate the good relationship the original Pilgrim settlers had with the Wamanoag without condoning difficulties between later settlers and other Native tribes. It grieves me, though, that we throw out the baby with the bath water, so to speak, and, in the process, rob our children of an important aspect of our American heritage.

We can also know that, though every European immigrant who sought a new life here was sinful...as was every Native person who immigrated across Asia and into the Americas centuries before - and as we all are today - the bottom line is that God was and is in control, orchestrating and allowing everything that has happened throughout history all around the world for the sake of His ultimate purposes. We don't always (or even usually!) understand what He has in mind, and that frustrates us because we want to "know." But, like it or not, it was His will that Native settlers come to the Americas first and that Europeans arrived later. And He has His reasons for allowing all of that to unfold as it did. As author Eric Metaxas says in Squanto and the Miracle of Thanksgiving, one of my favorite picture-book renditions of the story, "Who but the glorious God of heaven could so miraculously weave together the wandering lives of a lonely Patuxet brave and a struggling band of English Pilgrims in such a way that would bless the whole world for centuries to come?" 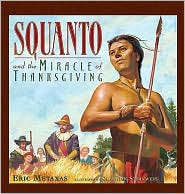 Amen! So may you enjoy a wonderful Thanksgiving weekend - if the Pilgrims and Wamanoag had three days, it's fine for us to take four if we're able! - enjoying your own friends and family, remembering with gratitude those who originated the day, and thanking the Lord for His vast blessings in your life.