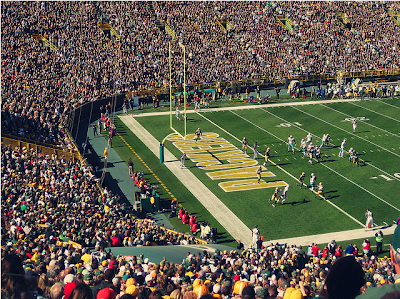 I live five miles from Lambeau Field in Green Bay, Wisconsin, and have been a fan of the Packers my entire life. Given its history as one of the NFL’s founding teams, Green Bay is surely the league’s most storied franchise and has been among its most competitive. And I personally have a competitive spirit as a fan. In fact, I’m one who “bleeds green and gold” – I refer to “us” when speaking of the team, wake my children with cheers when we win a night game, and feel mildly depressed when we lose.

Because of my passion, I’ve taken time to learn the intricacies of the game, and I mark with interest various players’ activity, both on and off the field. Along the way, I’ve made note of those who appear to have a healthy sense of competition…as well as those who don’t. And I think both examples might serve as useful models for the rest of us.

“Competition” in and of itself is not a dirty word; as I noted in my last article, it definitely has its place: in the business world or political arena, for example, and on the sports field. But a problem occurs when a competitive desire to win overtakes one’s identity.

In football, you know that when you see it. Those are the defensive players who consciously aim to take out a quarterback’s knees on tackles and the running backs who taunt opposing teams’ fans after a touchdown. They’re the ones who publicly belittle opponents before games and just as publicly berate their own teammates after a loss. And they’re the ones who find themselves at sea when careers inevitably end.

In contrast, players with a healthy sense of competition reach out their hands to help the quarterbacks they’ve just sacked. They perform celebratory dances in the end zone, but not at the expense of opponents or their fans. Win or lose, they shake hands at the end of a game and offer praise for “a good team and a hard-fought contest” even if they outscore an opponent 49 to zero. And they graciously make the transition to retirement, appreciative of football’s role in their youths but aware, too, that life holds much more for them.

Can you apply these examples to your own life – and help your kids apply them as well? For us, it’s our interactions at the office, how we speak of our children’s accomplishments with other parents, and even how we relate to our friends. For our kids, it’s about “competing” against one’s self for daily academic improvement versus making comparisons to others. And it’s about how they act on the bus and in the neighborhood. But the same principles apply and the question is the same, too: Is my competitive spirit sick or healthy?