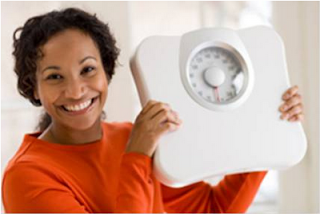 I recently overcame a fear of objective feedback.
Yep, that’s right: I stepped on a scale to see how much I weigh!

Now, I’m not kidding about fear. My phobia was so severe that I hadn’t independently stepped on a scale in many years, and I even squeezed my eyes shut while on the scale at doctor appointments. Then I insisted that neither nurse nor doctor tell me the number – and, in fact, I would have fired my physician on the spot had either “betrayed” me by blurting it out.

Having battled an eating disorder over the years, I was petrified that the scale would show me as “too fat” – because that’s how I've almost always felt – and I simply didn’t want to deal with the possibility.

However, God’s been working with me on that whole area for a long time – and in particular in a serious way since last summer. So, when I felt the clear conviction that he was asking me to stand on a scale and look, I knew I could do it (as promised in Philippians 4:13) despite lingering anxiety.
I wasn’t thrilled with the initial reading, which confirmed my intuition about being a few pounds above the top end of the “healthy” range for my height. But, contrary to my irrational belief that knowing the truth would send me into paroxysms of grief, I stepped off the scale smiling and feeling strong.

For one thing, I’d just stomped on a long-standing, significant fear, so I was justifiably joyful. In fact, I immediately felt relieved of all the baggage of my fear, just as Jesus promised we would when he said, “Then you will know the truth, and the truth will set you free.” (John 8:32)

In addition, stepping on that scale armed me with knowledge – objective feedback – instead of mere supposition and fickle feelings. As a result, I could know for sure I wasn’t “fat”…but I also understood why I wasn’t feeling my best, physically or emotionally. From there, I calmly decided that, yes, I did want to drop the extra pounds. Then I devised a rational plan of action and began implementing it in a healthy way – all of which stands in stark contrast to how I’ve treated my body in the past…when I was acting upon feelings rather than truth. In fact, I felt “transformed by the renewing of [my] mind.” (Romans 12:2)

Seeking objective feedback in any area of life – whether about yourself or about the children in your care – can be intimidating. And the results won’t always be ideal. However, with knowledge comes power – the power to then seek solutions.

So…in what area do you need objective feedback today?