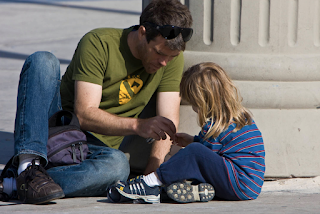 Correcting requires careful observation and for you to use more words. It may also require an attitude change on your part. You must be interested in helping children improve rather than just pointing out what’s wrong and maybe getting some perverse power from putting them in their place. (Start with the Heart, p. 210)

It’s all-too-easy in the trenches – when we’re probably overextended in other areas of life as well – to lose sight of the kind of intentional parenting it takes to carefully observe our children, focus on helping them mature, and keep a check on our own attitudes. It’s easy to fall into an unhealthy routine of on-the-fly criticism to curtail some imminent bad behavior. But, of course, that causes most children to react with defensive antagonism, which then leads to more criticism by parents, and eventually sets up what seems like a never-ending cycle of angst in a home. This is why too many kids can’t wait to leave and why too many parents think (or even say), “Good riddance.”

I feel a bit like a broken record when I say this, but it’s truth. The way out of this sort of relational tailspin comes down to a parent’s conscious choice (day in and day out, moment by moment) to be the parent – i.e., a mature, responsible adult. It is not a child’s responsibility to “stop being a brat” so the parent “doesn’t have to” scold. It is not a teen’s role to “grow up already” so the parent can stop criticizing.

It’s actually just the opposite. As a parent chooses to stop scolding, a new relational pattern will develop such that the child will eventually stop acting out in “bratty” ways. As a parent chooses to move from criticism to correction, the teen will learn as time progresses to truly hear the parent’s words and then begin to self-regulate. Difficult as it is and as much as we dislike “adulting” some days, it is our job as parents to take the lead…because we are the parents.

Having peaceful homes and fulfilling familial relationships – both of which are wholly possible –starts with us as parents. Parents choosing their “better angels” over knee-jerk emotional responses. Parents deciding to watch their words and actions. Parents putting on the cloak of maturity no matter how unnatural it may feel at first. Parents faking it till they make it. Parents being parents.