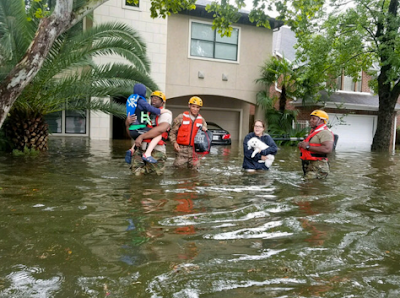 Kathy and I have spent the last several months talking about willing-good character – defining and describing it, and delineating ways in which you might encourage your kids to develop it. And then Hurricanes Harvey and Irma hit – as of this writing, José and at least one other remain at sea – giving us all opportunities to witness willing-good character writ large in living color right before our eyes.

If you’ve been paying attention to any news coverage, you know what I’m talking about. People like:


We saw these and other acts of willing-good character not because people were looking for publicity but simply because the ubiquitous news crews sent to document the events surrounding the storms happened to catch them on camera. As far as these and other heroes of the hurricanes were concerned, though, the cameras were invisible. These good folks were simply helping because it was the right thing to do. They didn’t care if anyone else knew; they just did what they saw needed to be done. They exhibited willing-good character without giving it a second thought. And, though we’ve heard of some instances of looting and price gouging, the prevailing narrative remains on the vast majority, who appears intent on doing right by those around them.

As scary as hearing about these uncontrollable natural disasters surely was for some kids and as difficult as recovery will be, we can find cheer in these people. And we can use the stories of the hurricane heroes as object lessons for our kids. If – in the worst of times – so many can so readily demonstrate willing-good character, we can too.