Part of the Train but Not Driving It 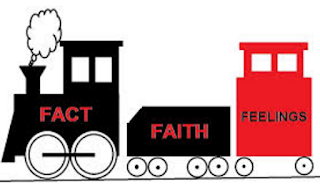 One of my daughters is very emotionally sensitive, often allowing herself to be ruled by her feelings. When she was young, this manifested in impulsivity. She reflexively bit her sister instead of remembering to work out a disagreement with discussion. And she literally put her finger in a light socket because she felt like seeing what would happen rather than remembering the warnings my husband and I had given her. As she’s gotten older, she’s struggled with bouts of anxiety as she allows her feelings to control her reactions to various everyday occurrences.

A little girl whom I babysat from her infancy until she was nearly six was the epitome of strong-willed childhood. Even in her first few months, her parents and I clearly saw evidence of it – and over the next few years, we wrestled with it on a regular basis.

Both girls are good girls – very good girls. From an early age, their love for others and desire to do the right thing was evident, and both accepted Christ as Savior when they were still preschoolers. But each has still needed guidance in terms of learning to put her feelings in proper perspective.

The parents of my young friend and I talked about this regularly beginning when she was still a baby. Since she spent eight or nine hours a day at my house for about half of every year, they asked me to partner with them in shaping – without breaking – her will. We knew that God could use her in amazing ways for His kingdom if she could harness her strong will for good. So it became our daily task to prayerfully decide how best to address each of her meltdowns to that end.

I did the same with my daughter when she was young. But now things are a bit different since her battle with feelings has turned inward, causing emotional harm to herself instead of impulsivity being directed toward others. My goal is to help her see that feelings are good – we err gravely if we communicate to kids they ought to be stoic – and that her sensitivity is a gift from God, but that she needs to keep feelings in their proper perspective.

Over the years, I’ve always come back to this simple Fact-Faith-Feelings illustration. It’s not that we should decouple Feelings from the train; in fact, trains are incomplete without cabooses, and cabooses have an important anchoring role. But we must remember that Feelings ought not be pulling the train, nor powering it. When we mix up the order and let Feelings take a role for which they’re not equipped, we cause problems for others and ourselves.

My little friend is 10 now and she’s learned this lesson well so far. She’s not done – she’ll no doubt have new track to navigate as she enters adolescence – but her words and actions currently communicate quiet strength. My daughter’s route comes with hills and valleys these days, and her Feelings car regularly tries mightily to jump the track and throw her completely off-kilter. My job as her mom is to pray for and with her so that it happens less and less and to do everything I can – through my words and actions – to help her keep those Feelings where they belong. Part of the train but not driving it.