Do Small Things in Love 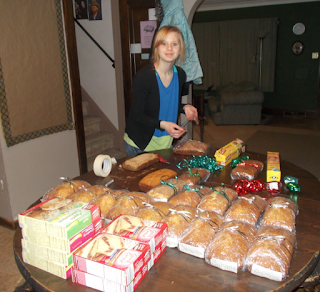 One day last fall, my younger daughter – who had rather recently discovered a love for cooking and baking – announced that she wanted to “do something” to help some “less fortunate” folks in our community. She’d thought through her idea thoroughly enough at that point to know she wanted to bake and share the fruit of her labors. I helped by listing the names of area shelters, and she quickly honed in on one – the “house” designated for men struggling with homelessness and addiction. That ministry had helped a friend’s dad to break free of alcoholism and, as she said, “All the shelters can use help, but I think most people probably focus on the ones for women and children. I bet these men are forgotten a lot.”

My initial “mom instinct” was to make a call to the shelter for her; after all, we knew almost nothing about the place and it housed “troubled” men who might – in theory – be “dangerous.” But I stopped myself and instead encouraged her to call, realizing that if she were to own the project, she should take the lead. A phone call was very safe, and I’d obviously go with her if she followed through. But to start with, she needed to know I had full confidence in her to proceed.

At her request, I coached her through what she might say, but the rest was up to her. And follow through she did! She spoke with the shelter director, estimated what she’d need to make 36 quick breads (one for each man and an extra for the director himself), insisted on paying for everything with her own money, went with me to make the purchases (because she’s not old enough to drive herself yet), and then spent the bulk of her waking hours for two days mixing, baking, labeling, wrapping up, and praying over each individual bread. Finally, she called the director back to arrange a delivery time and happily toted her boxes of breads up to the shelter’s second-floor dining hall.

As my child, I obviously think she’s something special. But in a greater sense, she isn’t. She’s “just” a kid who – by God’s grace – has developed empathy and a strong desire to serve others. Every child and teen can be the same – and so many already are.

Our job as parents is to nurture the unique ways in which God has wired each of our children so they might begin to notice how their talents and abilities can make a difference in the wider world. And when they start to gain a vision for what they can do – even if it’s something as small as baking bread for down-and-outers who “don’t deserve it” – we must encourage and enable them. When a child realizes she can make a difference, she’ll want to “be good” in order to accomplish her goals.

“Don’t look for big things, just do small things with great love…
the smaller the thing, the greater must be our love.”