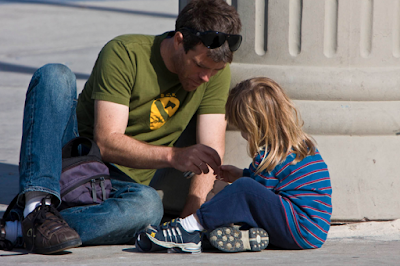 About once a week, I sit down and watch an episode of Dr. Phil. I don’t agree with everything he says, and some episodes really don’t have any redeeming value. But he regularly addresses significant parenting/family issues, and he does provide some sage advice.

Not long ago, I tuned in to hear a very normal-looking woman and her apparently nice-guy husband describing her adolescent son – his stepson – as “nasty” and “probably demon-possessed.” Incredibly, the son was present for the interview and had to hear his parents refer to him as such on national television. Yet he didn’t lash out in anger; instead, he freely admitted the inappropriateness of his stormy behavior at home. Of course, viewers couldn’t be privy to all the details about the family’s life or even to the undisclosed background information Dr. Phil had learned prior to the show, but nothing about the young man seemed the least bit demonic. And, in fact, the parents came around in fairly short order, and acknowledged that they were wrong in their characterization. If Dr. Phil follows through, as it appears he does, the family will receive on-going counseling that has the potential to heal its damaged relationships.

I don’t know if the parents profess Christ; if they don’t, their road to wholeness as a family will be extremely bumpy and tenuous even with Dr. Phil’s resources in hand. But – tragically – I know many self-proclaimed Christians who speak to and about their children in the same way – as if they are evil troublemakers – and exhibit the same blind spots evident in the Dr. Phil couple. That couple needed to avail themselves of the Fruit of Spirit, including gentleness, and so do we.

We think of gentleness as a synonym for weakness, equating it with being a doormat. But nothing could be further from the truth. Gentleness is actually defined as an “absence of bad temper or belligerence” and “deliberate and voluntary kindness and forbearance.” It can be further described as an ability to tame, mollify, calm, pacify, and sooth. In other words, gentleness is a trait that a person consciously chooses to exhibit for the ultimate good of another. Gentleness in a parent is a decision to wear a cloak of quiet strength in the midst of a child’s storm so she can say, “What you’re doing isn’t right, but I love you so I’m going to choose calmness in response in order to guide you to the truth.” It doesn’t give in to the child’s error and sin; it purposefully and consciously directs him out of it.

If the Dr. Phil couple had chosen a habit of gentleness at home, the family never would have found itself on a Hollywood soundstage. As followers of Christ, we can avail ourselves of gentleness with our own kids every day. It’s not easy to choose calm in the middle of a child’s rage, but it is possible.