Fruit from the Supernanny 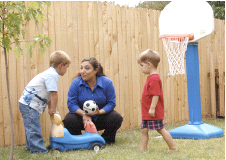 Did you ever watch Supernanny? I didn’t make a point of sitting down for the show every week, but I caught episodes now and then. And, though I didn’t agree with all of Jo the Supernanny’s ideas, I applauded her firm-but-fair, action-oriented approach to correcting misbehavior.

She first helped the parents choose behavioral expectations and age-appropriate consequences for non-compliance. Then she coached the parents on the importance of consistency and spent considerable time and effort modeling correct responses to the children’s inevitable limit testing.

For example, if a child slapped a sibling, Jo immediately got down to his eye level and named the violation and consequence in a deliberately calm voice (“Johnny, you just hit Sally. You must go to the ‘naughty chair’ now.”). Of course, the child refused and began to whip himself into a frenzy – dramatic footage for the show, yes, though all too common in real life as well – but that didn’t faze Jo. She just calmly picked him up and carried him to the time-out chair, knelt at his level again and said, “You’re here because you hit Sally. You need to stay for five minutes.” And, when Johnny inevitably got up and ran away after just a few seconds, Jo didn’t yell. Instead, she silently – and calmly – went after him and placed him back on the naughty chair. Every.single.time…even if, as we viewers were told, Johnny ran off four or 20 or 100 times before finally sitting for five minutes. Jo didn’t give up or lose her cool. And the children always eventually complied.

The key to Jo’s success was consistent, calm action. And that’s not an effect for TV; it’s truth in real life. Providing appropriate correction is very hard work, but – having gone through it myself as well as seeing the results in many other children – I can attest to the fact that it’s well worth the effort. If you take the time in your child’s preschool years (and/or back up and re-train at a later age if necessary), you’ll soon enjoy the sweet fruits of your labor.