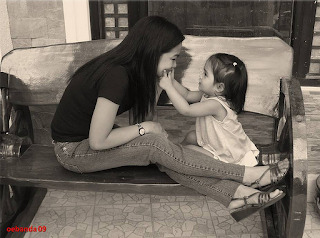 Last time, I shared a simple technique I stumbled upon to help my kids with first time obedience. That little trick, which emphasizes the “first time” part of the phrase, still works for us several years later. But I realized even before I understood the importance of quick compliance that I had to make sure my children first knew what “obey” actually means. I couldn’t assume they understood because, if I was going to hold them accountable for the behavior of obeying, it was only fair to be certain they really knew what I was talking about.

They were toddlers at the time, so pulling out the dictionary for a 50-word, four-part definition wasn’t an option. In fact, I’d suggest that simple, clear explanations are better for older kids, too. So we landed on an easy-to-understand phrase that actually comes from the Hebrew meaning of “obey”: listen and do. And I set about directly teaching that definition to my kids.

To this day, I remember having them chant with me: “Obey means listen and do. Obey means listen and do.” As we said, “listen,” we touched our ears. When we said, “do,” we marched in a little circle with our hands outstretched. Then we interactively reviewed the definition several times a day for many days, and at random moments I began asking each girl, “What does obey mean?” When each could repeat the definition, actions included, without hesitation – and also tell it to me in the context of having to obey in a real situation – I knew they had it.

I also explained that both parts of the phrase are equally important. After all, if a child hears but doesn’t really stop to listen to a parent’s words – paying close attention – how can she follow through with the appropriate action? And, if he doesn’t actually do the requested task – in a very timely manner – there’s no evidence that he actually listened; therefore, he hasn’t obeyed, even if he intended to.

God told the Israelites that true obedience depends on both listening and doing. He was able to bless them when they complied. And I have found that principle to be true with my children. I am far from the perfect parent, and they’re not perfect kids. But, because I could help them understand obedience through direct instruction early on, they felt very secure about the expectations and have been able to consistently and willingly comply. As a result of that, our home has been blessed with peace.