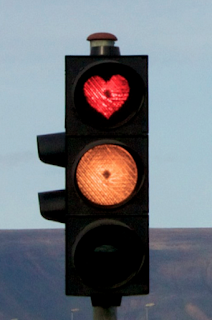 A few weeks ago, a gal on The Homeschool Lounge posted a link to an article that describes a situation in Tennessee wherein a homeschooling family sought permission for a child to play on a sports team at the local public high school.

I replied as follows, urging extreme caution - a big, fat flashing yellow light born of love for educational freedom - from those who would advocate such inclusion.

This kind of thing comes up in various places around the country now and then. I have mixed feelings.

On the one hand, we homeschoolers pay school taxes, too, and don't "benefit" from anything else in the schools. So why not be able to participate in extras?

The argument from opponents in the system often comes in the form of questioning how they might "keep tabs" on "those kids" (i.e., What is the guarantee that homeschooled kids meet eligibility standards in terms of grades?). Of course, that's a legitimate question in a way, since the system bureaucrats are not controlling the educational environment of those children. (And, because they're unaware or disdainful of it, we'll ignore for the sake of argument research such as this which consistently shows homeschoolers averaging in the 85th percentile on standardized tests compared to public school performance at the 50th; that's a topic for a different day.)

But for me, it comes down to the control issue, too. That is, if we want our kids to participate in government school activities, we have to acknowledge that - since they have standards for participation and homeschoolers shouldn't be given "special dispensation" - they'd have a right to wield some control over our children's academic environment. And that is where I draw the line...because I will NOT have the government's nose in my home.

If they had a right to take a look, they'd see excellence, so it's not about fear that they could legitimately deem me "inadequate." Rather, it's the principle that they have no business knowing ANYTHING about what occurs in my home, and I'm not going to give them one centimeter beyond what the state homeschool law requires. In other words, I will not voluntarily cede parental control over my children's education just so the child can play a sport. No, we'll "make our own fun" instead...and, in the process, I'll point my kids toward activities that can be lifelong endeavors instead of something that brings glory in high school but then, by necessity, is done forever.

I used to love the HSLDA. But they strongly advocate for the "right" of homeschoolers to participate in public school activities, and so, on this matter, I respectfully disagree with them and appeal to their sense of general fairness to make my point. That is, though it's true that an individual family might voluntarily choose to cede some measure of control to the public schools for such participation - and I TOTALLY support each family's right to make educational decisions for its own children - the problem is that, where there's a little power, there becomes an appetite for more. Thus, it is not at ALL beyond the pale to envision a situation where a district or state says, "Oh, this subset of homeschoolers is voluntarily doing x, y, and z so their kids can play sports. Thus, it won't be any problem at all for us to now REQUIRE x, y and z of ALL homeschoolers here. After all, if they volunteered it, they won't mind doing it. And, oh, we'll add a, b and c that as well!"

So it's a slippery slope. AND, if/when someone (inevitably) gets it in his head to legislate those extra requirements for ALL homeschoolers, those who wanted to participate in government school activities will have forced the yoke of more regulation onto all homeschoolers. And that's just wrong, pure and simple.

I think that those who support public school extracurricular involvement have good intentions for their own kids...but they're short-sighted, failing to see the potential, long-term consequences beyond their own homes. And it's not paranoia to worry about that; there's a long history of certain types of legislators continually seeking to shove more regulations down homeschoolers' throats (even in recent months, this was a big deal in Illinios, for example). Those people will always be around and will always look for opportunities to seize.

Ultimately, I think we do better keeping ourselves independent. Yes, it's a pain to pay taxes for services we don't use...but I pay taxes for fire and police protection and hope and pray I never need those either.

I think our energy in the area of extras is better spent building strong homeschool associations and good relationships with independent community organizations. In addition, we should consider forming homeschool athletic associations (which are not uncommon anymore) and partnering with private schools, many of whom embrace homeschoolers' participation on their teams because it makes them more competitive. Yes, that would involve fees, but I believe that would be a small price to pay to insure our independence.