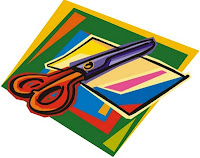 I made a difficult decision tonight.

I got home right at my girls’ bedtime and headed upstairs to give them goodnight kisses. On the steps, I met Rachel, a pair of scissors in hand.

As she said, “I’m putting them back because Abbie said I can use her sewing scissors,” my heart sank.

You see, I’d recently made a new rule: no scissors upstairs. My girls are eight and nine so this wasn’t for safety reasons. Rather, they’d shown irresponsibility by losing every one of the half dozen pair of scissors that should be stored in our craft cupboard. As a result, we could find none when I needed them for a project with my daycare charges – even after scouring the house. I’d since bought replacements, including the one in Rachel’s hand.

While she returned the scissors, I waited in the girls’ room and then asked for an explanation. She’d intended to cut out fairy tale pictures my husband had copied for her from an old book, a task she thought would be a good way to wind down for the night.

I said, “You know you’re not supposed to have scissors up here. You should’ve waited till morning,”
She lowered her eyes and answered, “Yes, but I really wanted to do it now.”

At that point, I knew what I had to do – though I longed for an alternative.

I asked for all the pictures she’d cut in her room, letting her keep those she’d done downstairs. She readily handed them over because, though she’s impulsive, she has a sweet soul and wants to obey.
With quivering voice, she asked what I planned to do, though she already knew. Even so, when – because I really was sad, not angry – I gently explained that I had to throw them out, she fell apart. But I’m grateful she collapsed into my arms instead of turning away, and I sat with her a long time as she sobbed.

When she’d calmed, we talked it through again. I know she’s still heartbroken, but I’m confident she understands my reason and – more importantly – that I love her unconditionally.

The contraband pictures sit next to me as I write – and I would dearly love to return them to Rachel in the morning. But I think the right decision – hard as it is – is to follow through with the natural consequences of Rachel’s poor judgment. In the long run, that’s better for her, as I think it’ll be a moment she remembers the next time she’s feeling impatient or wants to bend a rule. As a mom, I must do the hard thing now to help her later.