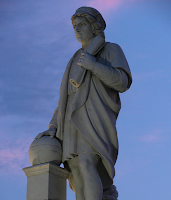 In recent days, I've seen several online discussion threads wondering about the appropriateness of celebrating Columbus Day and Halloween. And, over the course of the last couple of years, I've read the opinions of devout, professing Christians who fervently oppose the formal recognition of Christmas and Easter. Of course, I have personal beliefs in regards to each of those days and others as well. So I've decided to start an ongoing series I've coined "Celebration Contemplation" in order to share my perspectives.

Today, of course, marked the official recognition in the U.S. of Columbus Day, one day shy of the 518th anniversary of his actual October 12 landing on a Bahamian island. The girls and I studied Columbus in age-appropriate depth last year, as part of our home education curriculum at the time, and we will do so again in the next couple of years. This year we're focusing on world geography and ecology and today started a new unit on Brazil. Nevertheless, I took time from that to read a couple of picture book biographies about Columbus and his exploration endeavors. In so doing, we "celebrated" his accomplishments...without apology.

I've heard all the arguments for donning sackcloth instead, but I just don't buy them.

For example, some say we shouldn't make a big deal of Columbus because he never actually set foot on (North) American soil; thus, in that sense, he didn't "discover" America in the first place. And, while it's true that he landed first in the Bahamas and then "only" explored throughout the Caribbean, along the Central American coast, and into Venezuela, his accomplishment (i.e., showing Europeans the existence of two additional continents on the globe) shouldn't be discounted merely because he didn't personally plant a flag in North America. For one thing, it's the height of hubris for North Americans to presume to be the only America "worthy" of such exploration in the first place (as if visiting other parts of our hemisphere wasn't a "real" accomplishment). And, secondly, it's beyond dispute that Columbus' discovery of the Americas opened up the doors for subsequent exploration by others, of lands both north and south. Yes, without Columbus, some other European would eventually have made his way "across the pond" and initiated a similar rush, but the fact remains that it was Columbus who began the process, and he deserves credit for that.

Of course, others will point out that, in fact, Columbus didn't "discover" anything. After all, native peoples were on the continents for thousands of years before - ever since their migration across the Bering Strait following the debacle at the Tower of Babel - and Leif Ericsson and the Vikings arrived here from Europe some 500 years before Columbus and his crew. However, the point of marking Columbus' accomplishment is not to dehumanize native populations or minimize Ericsson's endeavors; thriving native cultures were here, and the Vikings did establish a temporary colony in the north. But Columbus Day is about recognizing that his discovery of the Americas was a discovery for the majority of Europeans of the existence of these lands - knowledge they did not previously have because news of Ericsson's voyages had not made its way south of Norway. In addition, the Viking settlements were temporary, but what Columbus' voyages initiated "stuck" in terms of creating permanent settlement and colonization, and that's worth acknowledging as well.

"Well, look at all the misery Columbus brought here," still others will say. However, that's a red herring if there ever was one. First of all, Columbus himself did not initiate the harm of the natives whom he encountered; quite to the contrary, one can read in his journals of his respect for the Arawaks and others he met. And he treated them with kindness and grace. Yes, the men he had to leave behind after the Santa Maria was shipwrecked did abuse and kill many natives, and he did have to mount a defense when he and his men experienced a retaliatory attack from some of the Indians. However, we cannot blame Columbus for the actions of other men (especially when he was on a ship headed east at the time!); nor could we expect him to sacrifice the lives of all his men in the face of attack. He was a soldier of sorts, not a Quaker, and - like it or not - men sometimes do battle with each other. And, in fact, let us not forget that groups of natives waged plenty of war on each other long before any European set foot in the Americas - so it can hardly be said that Columbus and the others "brought war" to this hemisphere.

Similarly, we cannot relegate Columbus to the scrap heap of history because some who came after him enslaved and otherwise hurt many natives. Columbus did not "bump into" new continents with the intention of subjugating anyone - he was merely in search of a new trade route to China and intended to show homage to the Chinese emperor - so it's ridiculous to try holding him responsible for the actions of those who came dozens and hundreds of years after him. And, in the same way, we cannot blame Columbus because Europeans who came here happened to carry diseases that proved deadly to the natives. No one at the time purposely "cooked up" fatal illnesses to carry over here in petri dishes to wipe out the Indians. Tragically, it happened, but it was not deliberate, and it certainly wasn't Columbus' fault.

In light of all this, though, wouldn't it have been better all around if the Europeans had simply stifled their "evil" desire for colonization and stayed home? But that's certainly an arrogant idea, isn't it?! Yes, we now have different notions about colonization, but why would we expect folks in the 15th century to share our views? They lived in different circumstances and had reasons for their beliefs. So it's a cheap shot to look back in time and judge the Europeans of Columbus' day on such matters. We cannot go back and change history to our liking (despite attempts at such by rogue revisionists) so there's no point in bemoaning and attacking beliefs that differ from our own. And, furthermore, who's to say that the natives would have been better off if the Europeans had not come? It wouldn't take long to list dozens (if not hundreds) of advantages (for many people groups, including indigenous ones) that resulted from European colonization of the New World. So it's conjecture and intellectual dishonesty to assert that some are worse off than they would have been if Europeans had "stayed home."

In the end, I think one's view of Columbus Day comes down to his or her larger worldview. A secular humanist with post-modern, deconstructionist views of history is going to want to destroy the legacy of a man who - though admittedly was not perfect (who among us is, please cast the first stone!) - accomplished amazing things in his time. In my case, though, I choose to have faith in the God who created and oversees this world to this day - even when I don't understand all the workings behind particular historical events. I know He works in all things for ultimate good (Jeremiah 29.11), despite what each person's individual sin may yield in his own life or that of others. So I know He had purposes and plans for allowing the events of Columbus' day to unfold as they did. And, though even today my girls and I talked about some of the difficult issues surrounding European colonization (because my kids will always get the full truth from me), I refuse to shame or demonize one man for the sake of 21st century political correctness.

And so, yes, in this home Columbus is acknowledged and given due honor no matter how many in the general population prefer to drag his name through the mud. As an American of European descent, his accomplishments ultimately made a difference in the lives of my ancestors - who immigrated here at the end of the 19th century - and, by extension, to me and my kids. But, even more so, it was clearly a part of God's plan - it had to be because He allowed it - and that's good enough for me.