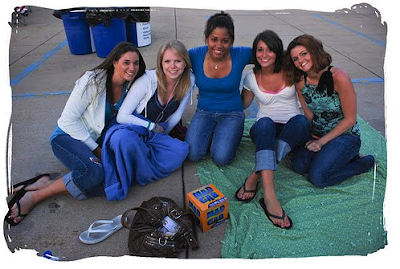 Every year in my city, the Chamber of Commerce sponsors a unique seminar-style class for local businesspeople. Participants meet at the technical college one Tuesday a month to learn about one important aspect of community life each time.

And January is Education Month. So on the second Tuesday in January, the 40 participants divide into four-member teams and go on "site visits." Each team visits three different area school sites, and then the group reconvenes to "debrief" so each group can share about its experiences at the various locations.

For the past two years, I've invited a team into my home, serving as the sole representative of traditional homeschooling (while another local mom shares about virtual public schooling). This has been somewhat nerve-wracking - I spent my entire Christmas break the first year re-painting my living room in order to make a good first impression! - but I believe it's important to help members of the general public understand homeschooling, and this is a perfect opportunity to make a positive impression on people of some influence.

And so God has given me a great deal of peace about it. The first thing I've done each year is to state very clearly that - while I'm happy to provide whatever information I can and to serve as one example - I do not speak for every homeschool. And then, knowing that most people understand virtually nothing about home education, I've figured that the best thing I can do is open it up for questions. That way, I'll be certain to address what the participants actually want to know.

Of course, the inevitable first question is - just as in virtually any setting where I disclose that I homeschool - "What about socialization?"

And on this one topic, I feel pretty secure in saying I speak for most homeschoolers when I state here - for the record - that we hate this question! To most of us, it's akin to cursing us out. At the very least, it's a most tiresome topic, and we'd much rather talk about the latest educational website we've found, the animal cell the kids made from Jell-O last week, or the CLEP test a child just passed.

In fact, research supports what we already know: homeschoolers learn their socialization skills just fine, thank you. Generally speaking, homeschooled kids participate in plenty of extracurriculars and end up as very productive members of society. And, actually, every human being on the planet is socialized (i.e., made "fit for companionship with others"). So it's not a matter of if - just of how.

A home-educated kid's path toward learning important socialization skills is probably at least somewhat different than his schooled neighbor's experience, but "different" doesn't equal "bad," "inadequate," or "wrong." And so the question about socialization feels like a slap in the face - a baseless insinuation that there's something wrong with us or our kids. Nonetheless, I blithely answer the question with data - a copy of or link to the research noted above; a list of all the extracurriculars available through my homeschool association; a recitation of the many outside activities in which my girls participate each week; an invitation to speak with them directly so the inquirer might rest assured that they can, indeed, carry on a conversation - and then hope to move on to something more interesting.

But this past January, one of my visitors - a dad whose children attend a local private school - was particularly concerned about "the s-word." And he put a spin on it that I've never even considered before: "Don't you think your kids are missing out by not having the opportunity to be bullied?"

At that - in a truly rare moment for me! - I was left speechless. I picked up my jaw from the kitchen floor and rambled on for a minute about my girls "getting to" experience interaction with a sort of "mean girl" at ice skating. And then - blessedly - someone else asked a question about curriculum, and we could move on.

Now that I've had time to think it through, of course, I would say much more. In fact, I wish I knew the gentleman's phone number so I could give him a more intelligent response. But at the very least, I know how I'll answer the question if it ever comes up again.

And I wouldn't have it any other way. But I know what the businessman meant. He wonders if - by not "letting" my kids experience bullying - I'm denying them the opportunity to learn how to handle themselves in the midst of tough circumstances. He wonders if they'll have the self-assurance to deal with difficult people as adults if they've not experienced doing so as children.

And to those concerns, I have one main response: five-year reunions. Who among us that attended institutional school - whether public or private - got along with everyone? I daresay no one could truthfully answer that question with an, "Oh, me!" Instead, no matter how small your school, different groups of students banded together out of common interest. You remember: the Brains, the Jocks, the Druggies, the Band Geeks. And, even if you were not explicitly bullied, you all understood that you "had to" stick to your own "clique" and avoid the others.

But what happened at the five-year reunion? The valedictorian had a great conversation with the quarterback. The "dummy" laughed with the cool rich kid about how bad the lunches were. The guy who'd hung out at the smoking barrel and skipped a lot of afternoon classes asked the goody two-shoes on a date the following Saturday. You might have started out with members of your "clique," but you didn't stay there for long; instead, you enjoyed talking with everyone and didn't even think until later about how you'd unconsciously crossed all the old boundary lines. The emotional baggage from your school days flew away as you realized that your old classmates had grown up and matured - and so had you. Now you interacted as adults, and it was wonderful.

By homeschooling, I'm just accelerating my kids to the five-year reunion mark. They have plenty of opportunities to practice proper socialization skills through a plethora of extra activities within their own family (no easy feat in and of itself!) and in a wide variety of community endeavors. However, they can learn those skills in a safe environment and, thus, avoid the soul-scarring that so often results from traditional school-style "socialization." They still have to deal with their share of difficult peer situations. But they don't have to be subjected to ridicule for seven hours a day, 180 days a year, for 13 years of their lives - which happens in school socialization because bullying begets bullying until particular children are singled out and victimized repeatedly.

Home-educated kids will, undoubtedly, encounter difficult peers in their adult lives as well. The fact of the matter is, though, that by the time they experience such people in their adult lives - whether at work, in the neighborhood, or at church - everyone will have grown up. Most kids who bullied do not bully as adults; they mature and realize the error of their ways, repentant and ashamed of their childish behavior. And most adults don't bully - not really. Some adults can be "challenging," but that's not bullying. And an adult who must interact with a difficult peer can get away in any number of ways that are simply unavailable to a scared child stuck by compulsory school attendance laws in a daily hell of taunts and physical violence.

So I'm thankful I can give my children the luxury of getting to wait for regular, sustained interaction with others until everyone has grown up and matured. In fact, home-educated kids are actually on the leading edge of a much healthier view of human interaction. So please don't ask us about "the S-word" as if our kids have a problem. Consider, instead, asking us how to begin homeschooling so your kids can get out of the mess of schooled socialization.