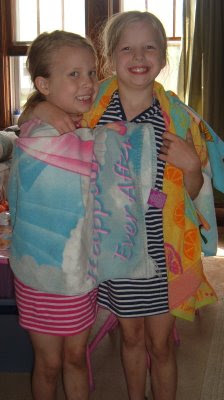 My girls recently started summer swimming lessons. They are seven and eight but have not previously had formal swimming instruction. I’d considered enrolling them the past couple of summers because, of course, I want them to swim at least well enough to be safe in the water; however, my girls are sometimes a bit hesitant about new situations, and one or the other always seemed to put up quite a fuss when I mentioned swimming class. Often, such protestations don’t stop me from doing what I know to be right, but with swimming I didn’t think it would be safe for them to be in the water while pitching fits. So I put lessons on the back burner.

I braced myself for similar reactions this year – even though I felt more strongly than ever that this was the year to start.

As it turns out, they responded enthusiastically to the idea and love every minute of the experience. They’re doing their best to master the strokes their teachers introduce; they happily paddle the length of the pool several times each session to practice those movements; they even braved the diving board, coming up all grins. In fact, though I’d signed them up for just one three-week session, they begged me after the first class to go all summer long – a request I was happy to oblige.

Having parented for only eight years, I’m still a novice compared to many. But one thing I’ve learned is that pushing our kids does no good. Offer various activity options throughout each year? Absolutely. Encourage them to do their best? Definitely. But try forcing them to do things before they are developmentally ready – either physically or emotionally? No way.

For example, we can try to force a newly minted two-year old use the potty – because we are sick of diaper changes and want to cut out that expense. But if the child is not ready, all the prodding and stickers and eventual frustrated shaming will do absolutely no good. The child simply cannot potty train until he is physically and emotionally ready to do so. And, as a wise friend once pointed out: No one goes to college in diapers! So it’s much better to take potty-training cues from your child, allowing her to tell you when she wants to try. Then her self-motivation will yield greater success much more quickly.

Similarly with other early learning tasks – learning to read, riding a bike without training wheels, or learning to swim, to name a few. Some three-year olds are ready and able to tackle one or all of these, among others. But that doesn’t mean every preschooler must do any of them; in fact, most will not master any of those particular tasks until they reach early elementary age.

And that’s okay. The key is to take your cues on these kinds of things from your child. For almost every childhood learning task, there is a broad range of “normal” when it comes to the age at which something “should” be accomplished. Don’t let society…or your neighbor…or even a well-meaning relative dictate to you the “right” time for your child. Rather, check with a pediatrician about the normal range if you’re concerned, but otherwise back off and let your child show you when he is ready.

The difference is between a screaming, kicking child flailing around in the pool or an enthusiastic, joyful kid working diligently to master a task for which she is ready. Which one would you prefer to parent?