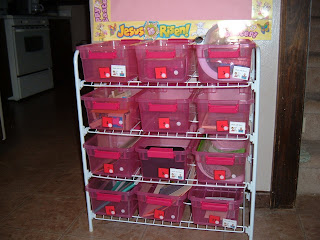 A few weeks ago on The Homeschool Lounge (THL), I caught a comment about something called "workboxes." Being the organizational junkie that I am (remember, my husband calls me Rou-Tina!), my interest was sparked, and I began to regularly monitor the THL discussion. Before long, I wanted to jump on the bandwagon!

Since then, I've seen and heard that this workbox thing is sweeping through the homeschool community; apparently, more and more users of My Father's World, Sonlight and Five in a Row are devotees. And, in just ten days, over 200 people joined a new yahoo! group on the subject.

So, what exactly is this workbox thing?

Simply put, it's a brilliant organizational system developed by a woman named, Sue Patrick, a homeschooler who first came up with the idea as a way to manage her own children's learning. She started telling others about how well it worked and began to do some consulting with families she knew. Eventually, she put her ideas into book-form and started speaking to larger audiences. Now, one thing has apparently led to another so that just recently word is spreading like wild-fire among homeschoolers.

Just before our spring break at the end of March, I ordered the book. I wasn't completely sure the concept would work for us, since the girls are so young and seemed to need almost constant guidance from me with their schoolwork. But I was willing to give serious consideration to anything claiming to increase learning while also fostering independence.

And the book - a quick-read which paints a much clearer vision of the system than anything on the website - convinced me to give it a whirl. So I ordered supplies from Sue and headed out to the The Dollar Tree and Target in search of two reasonably-priced metal racks, two big storage bins, and 24 plastic shoe boxes. As a nice bonus, I found the bins and boxes in the girls' favorite colors!

And then I spent spring break setting everything up and briefing the girls on how things would work once we started. I was surprised at how intrigued they were; they kept saying, "Is today the day we start the boxes?"

This past Monday - admittedly with some trepidation on my part (after all, I'd invested some money and considerable time and effort on the set-up and wondered what I'd do if this whole thing flopped!) – we did start.

But I should not have feared! It really isn't hyperbole to say we very likely had our best school week ever - and I'm sure the girls (and even Jeff, who saw the outcome when he came home from work every day) would concur.

Just as Sue Patrick says, the girls were actually excited to "check in" to school each morning to investigate what each of their 12 workboxes held. And then they were eager to begin!

Because of our Easter unit study, the first box each day this week was our group work. So the girls enthusiastically gathered up my little daycare charges for our group activities - a song, reading a Bible passage while discussing the contents of a Resurrection Egg, and reading an Easter-themed picture book. And, after that, they dove in without hesitation to the activities or instructions in the second boxes. Most often this first week, one girl practiced piano while the other did a hands-on, independent activity related to our group time...giving me a few minutes to supervise the toddlers on a hands-on activity geared just for them.

From there, the girls simply proceeded through the boxes, which I had filled the previous night with a balance of "work with mom" and independent tasks (i.e., file folder games, handwriting practice, reading to the toddlers or doing a game with them, writing to me in a journal). My job each day was to supervise all the activity, of course, while alternately sitting down with one girl and then the other on reading, math, or spelling.

Because different tasks required different amounts of time and the girls worked at different paces, there were a couple of instances each day when both girls came to a "work with mom" box at the same time. At first, I'd wondered how I would handle that scenario: Would the girls whine and complain? Would one insist on doing nothing while she waited for me, thus delaying the "flow" that should accompany the boxes? Not at all! With a brief instruction from me, they happily did just what Sue said they should: While one girl started the work with me, the other simply skipped that box for the time being, grabbed the next independent box, and got back to work - as if being patient and productive were as natural to them as breathing!

We started promptly at 8:45 each day (which is, in and of itself, a major accomplishment!). On Monday, things took a bit longer because it was our first day on the new system - so we didn't have lunch until 1:00 and even after that each girl still had one box to finish. However, we got more efficient as the week progressed. So by Friday they were done with all 12 boxes before 12:30!

Even more amazing is the fact that the girls never rushed just to get things done. Instead, they completed the activities in a quality manner - including some new and challenging tasks and a whole lot more independent work than they'd ever previously seen in a day. So finishing at 12:30 was finishing well - accomplishing at least twice as much in that timeframe as we ever had before and doing so in such a way that they really did learn and practice more age-appropriate content while also gaining a new sense of healthy pride in being appropriately independent.

And me? Well, I did more than ever - with both girls and with the toddlers - and I arrived at the end of each day and the end of the week amazingly, wonderfully (seriously!) refreshed! The girls made undeniable progress. For the first time in a long time on a school day, they got to mix in "fun stuff" (a craft, puzzle, or coloring page) with the "real learning." I could engage with the toddlers beyond diaper changes and potty checks. So my stress level throughout each day was almost nil. In fact, I was JOYOUS in my role of homeschooler this week!

Additionally, I'm not concerned that this week was a fluke. The testimonials I've read from many other moms tell me that we're in for continued joy and success using this system. So I am already looking forward to filling the boxes on Sunday night in anticipation of Monday morning. And I foresee another wonderful week with wonderful workboxes! 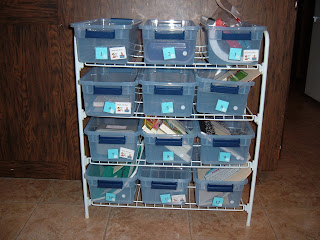