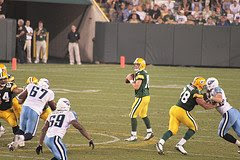 I’m a dyed-in-the-wool fan of the Green Bay Packers. I’m proud that the year I was born matches the jersey number of Packers’ great Ray Nitschke (you’ll have to research him if you want to know my age!); I ran through the streets the night the Packers won the SuperBowl in 1996 (and cried the next year when they lost); I teach my daughters all-important facts like what a quarterback sneak is and who linemen are; I might even bleed green and gold.

To be sure, the Packers had a rough year in 2008. First, Brett Favre – the team’s leader for over 15 years – retired. Then he unretired and, after weeks of rancor, walked away to New York. We rallied around our new quarterback, Aaron Rodgers, as we quickly saw the depth of his talent. But then – despite Rodgers’ athletic prowess and that of most of his teammates – the Packers sputtered through the season, closing out the year with a disappointing 6 and 10 record.

The Packers’ biggest problem was that they couldn’t maintain a high level of play through all four quarters. Despite inconsistent starts, they generally played great ball in the middle of a game; in fact, they were often firmly in control going into the fourth quarter. However, in virtually every loss, they fell apart in the last 15 minutes of play. To quote a cliché, they snatched defeat from the jaws of victory.

What about you? By now, you’re into the final stretch – the fourth quarter – of this school year. You’re not yet at the two-minute warning, but the clock is ticking down. And you’ve either just used up or are about to take your last time out: spring break.

If you’ve taken the lead against your opponent – Academic Failure – up to this point, will you now slack off, as the Packers appeared to do so often last season? Or will you tighten up the defense and make a last offensive push to rack up some extra points? On the other hand, if you’ve fallen behind, will you simply give up now and walk off the field? Or will you try for the kind of come-from-behind victory for which Brett Favre was famous?

Let’s assume you want to win. What does that mean, practically-speaking?

First, you need a solid defense. That is, you need to hold back Academic Failure by continuing to diligently complete your daily work; I suggest man-to-man rather than zone coverage, making sure you tackle each and every assignment, not just the biggest threat.

Second, you need a powerful offense, one that can score a touchdown or two in the closing minutes. In other words, actively study for quizzes and tests, going after your best possible scores the way a star receiver dives to make a big catch. Then strategically employ your special teams – that year-end project or extra credit opportunity – to pad the score a bit.

Finally, don’t forget to seek out the coaches – your teachers and parents – when you need a pep talk or some fresh play-calling. They want you to be well-conditioned and sure of the game plan going into the home stretch.

The end result will be a victory in this game – an academically successful year. Rack up enough of those and you also win the Educational SuperBowl: a solid core of knowledge and a love for learning you can eventually employ as you move into your adult life.