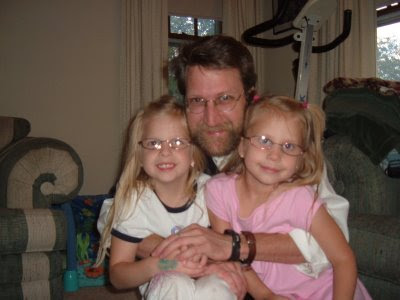 In early May, my daughter Abigail failed the eye exam at her five-year checkup. When the pediatrician recommended an optometrist, I bit my lip; I’d been hoping the eye soreness that she’d complained of was allergy-induced.

I put off making the appointment. I rationalized. “Look, she isn’t rubbing her eyes nearly as much. She’s not squinting either or saying they hurt.” But I finally took her in near the end of August. And I decided to have six-year old Rachel’s eyes checked, too. She’d never complained of vision problems, but my gut said, “Do it.”

An hour later, when Dr. Sandy said, “They both need glasses,” I wanted to cry. I tried to hide my anxiety, but must not have because she quickly added, “For both of them, the issues are genetic. You didn’t do anything wrong.”

Wearing glasses is obviously no big deal; probably more Americans than not have some kind of corrective lenses. And my husband has worn glasses since he was seven so I wasn’t surprised. But I feared that needing glasses would be a burden for them. And – sad to say – I was suffering from vicarious vanity.

The girls were thrilled. They love their “eye jewelry” and promptly pop them on first thing every morning. They proudly model them for friends and family. And they often say, “Mommy, we feel bad that you don’t get to have glasses like the rest of us!” So I purposed to see the glasses as they do.

Then I realized that these were more than just pretty accessories. Suddenly, Abigail stopped whining about being too tired to do math. She easily got through reading lessons with nary a hint of frustration.

And – despite being very kinesthetic – Rachel could suddenly sit still and focus through all her lessons. She’d previously fussed and complained about reading, and I could tell it was very hard for her. I’d even begun to wonder about dyslexia or other problems. But her very first day with the glasses, she breezed through a book filled with tricky sight words. I was stunned. As she closed the book, she grinned at me and tapped the grape-colored frames of her glasses.

I smiled back and kissed her forehead. Suddenly I saw clearly, too.

Email ThisBlogThis!Share to TwitterShare to FacebookShare to Pinterest
Labels: Parenting