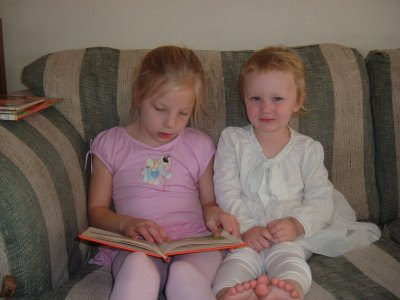 Shortly after my older daughter started learning to read, I noticed something unusual about her “word attack” skills. She quickly mastered initial consonants and many blends and digraphs, but she seemed unable to remember short-vowel sounds in the context of words – even though she could recite them in isolation.

I fretted about this for months, all the while plugging away with her at both phonics and “real reading”…and trying to hide my concern. I didn’t want Rachel to have reading problems…but I didn’t want to bury my head in the sand if she did.

Then, shortly after Rachel turned six, I took her younger sister for an eye exam. Rachel had passed her recent vision screening, but I was prompted to get her tested, too. And, voila! Rachel is far-sighted…so she had a hard time making out what letters she was supposed to decode. But on her first day with glasses, she breezed through a book that had been impossible the day before. And then she steadily progressed all throughout the fall.

But early last winter, she hit another wall; she seemed unable to consistently apply some other basic phonics rules. Conversely, she used picture and context cues to figure out all kinds of undecodable words. But I still worried. So last February I attended a seminar that described a method commonly used with dyslexic and dysgraphic students. Some – though not most – of the presenter’s descriptions fit Rachel. So I was in a quandary again. But that night I tried to figure out how I could afford a tutor.

However, the very next day, Rachel picked up a book that – as before – had been impossibly hard the previous day. And – bam! – she read through it beautifully…which I took as a sign to put tutoring on the back burner. And we marched on – through good and not-so-good days alike.

Rachel has always loved to look through books, and I know she makes up stories to go with the pictures; she’s got a great imagination. But even in recent months she has rarely chosen to actually try reading them. Which, of course, brought more angst my way! But now – out of the blue over the last couple of weeks – she’s in love with Amelia Bedelia and is eyeing Cam Jansen. And today she gleefully pulled out a Stepping Stone chapter book and announced, “I want to read this to you!” At a 2.5 reading level, that was a challenge for her, but one she was thrilled to accomplish.

Through all of this, I’ve recognized two principles that – in teaching and life – have usually been mere “head knowledge” for me. First, learning to read – and all learning – is a process. And it happens in fits and starts. Second, one must persevere through roadblocks and bumps to emerge on the other side of a challenge.

Undoubtedly, you can think today of a student who struggles with something you are teaching. It seems that he’ll never learn his math facts, she can’t master her flute fingerings, or he’ll forever fail to grasp the basic format of a three-paragraph essay. As a teacher, it’s hard in the midst of the storm to see the possibility of a clear day on the other side. But – barring major learning difficulties – progress will come. In fits and starts…if both your student and you persevere.