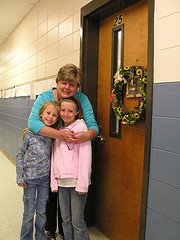 When I taught in the public schools, I spent the second half of June “recovering” from the school year. Then I geared up again starting on August 1, allowing the month of July for “real vacation.”

Truth is, I was never entirely off duty. Even when I locked up the books and lesson plans, my mind and heart were still with “my kids.” Had Elida—who’d run away in April—come home? Did Kue have everything she’d need for college? Was Roberto attending summer school? I suspect you’re now thinking of your students as well. In fact, we wonder about some long after they’ve ceased being our students.

Antonio was one of those kids for me. I taught him from seventh grade into his junior year. He was a consummate gentleman with an ever-present smile. And he tried to be a good student. He attended faithfully even when his buddies didn’t. He did his homework though he knew he’d barely pull off D’s. But Antonio struggled because he didn’t read well. He’d not mastered certain skills when he was younger and couldn’t catch up.

One day Antonio came to see me. He pulled up a chair and, with tears in his eyes, explained that he’d decided to drop out. He didn’t want to, but was quite credit-deficient and didn’t see another way. I cried with him, understanding, even as I racked my brain for a viable alternative.

That was the last time I saw him—until a chance encounter at the grocery store a few weeks ago. Eight years later. He wondered if I remembered him. “How could I forget?” I replied, recalling countless prayers for him.

Antonio’s thriving. He’s a husband and father. He’s worked full-time in construction since the day he left school. He recently enrolled in a GED program and plans to become a corrections officer. Best of all, he said, “For some reason all the things that seemed so hard in school are easier now!”

Not all our students’ lives turn out well, of course. No matter how diligent we are, much of what they encounter in life is beyond our influence with them. And we can’t even know what becomes of most. But we should pray anyway. Since they’re on your mind this month, pray for them. Who’s God bringing to your mind this instant? Pray for them.