A Hope and a Future 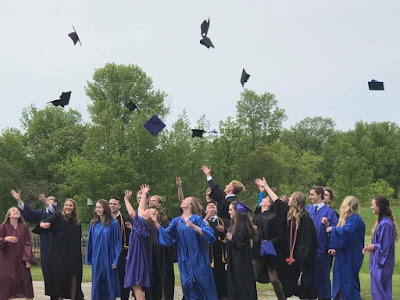 Earlier this month I attended the graduation ceremony sponsored by my local homeschool association. Within the program each graduate had written a brief paragraph summarizing favorite high school experiences and his or her post-secondary aspirations. And I noted with delight the wide variety of future plans – everything from pursuing a PhD in physical therapy or advanced degrees in mechanical engineering, biochemistry, and philosophy to attending cosmetology or culinary school to opening a business and getting married later this summer to taking a gap year while earning money for later endeavors to diving into missionary work. In fact, I don’t think even two among the 22 graduates had the same immediate game plan.

I know kids who graduate from conventional schools aren’t generally given a forum to describe their ambitions in a similar way. But I hope the pursuits of graduates from every school might be similarly as diverse. That would mean each teen had been given the opportunity to discover how the Lord has wired him and the freedom to chase after his God-ordained dreams. It would mean that every graduate has come to believe in the value of her future.

Sadly, I know my hope isn’t reality. Some young people have been held back by challenging or even debilitating family circumstances, improperly diagnosed special learning needs, or a lack of access to opportunities for exploring future plans. And we absolutely need to do whatever we can – within our extended families, neighborhoods, friend-networks, and church communities – to ameliorate such tragic situations.

But there’s another hindrance of which we must be acutely aware even with our kids who don’t wrestle with such struggles. That potential roadblock is – in a word – us.

As Kathy regularly exhorts those who attend her seminars, we must love and accept the children we have and not try to turn them into the kids we wanted. Perhaps you wanted a doctor in the family; instead, your daughter is called to teach. Maybe you’d hoped a son would get an MBA, but he’s passionate about joining the Marine Corps. Or you’ve dreamed since your daughter was five that she’d take over your dog grooming business but she has her eye on an Ivy League degree.

We obviously want our children to launch well and lead happy, productive, God-honoring adult lives. But we make a grave error when we attempt to force our wishes for specific vocations without regard for how God has designed a particular child. If we do so, we cause the child to doubt his own beliefs about who he’s created to be, and we risk robbing him of hope for his own future.

Teens obviously need our discernment and experience as they explore possible future endeavors; for example, a young person who desires to sing on Broadway but cannot carry a tune in a bucket needs gentle redirection. But we must take great care to ensure that our guidance is Spirit- not self-led, in order to partner with God in giving our kids a hope and a future (Jeremiah 29.11).

If they ask to stay, we change the value of player_in to False and transfer on to the dealer. A commonplace blackjack table dealing shift used to final forty minutes with a 20-minute break—that was in the ’70s and early ’80s. In the late ’80s, casino management discovered that working a blackjack dealer 60-minute table shifts did not scale back dealer accuracy or sport tempo. Each 1xbet player bets their stake and is dealt two cards face up, whereas the dealer has one card down and one card face up. Aces are valued one or 11, and film cards are all valued 10. The skills to split or double-down are the methods that make the game interesting.