The Hammer of Competition 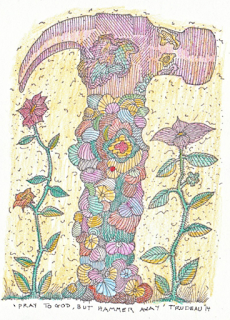 Is competition good or bad?

As with many parenting issues, this topic isn’t black and white. At times – for some kids in some circumstances – competition is helpful and motivating. At other times, though, it’s harmful and might even be soul-crushing. Thus, we shouldn’t blindly accept cultural norms about competition or expect all of our children to engage in the same level of competitive activity. Instead, our role as parents is to understand each child inside and out and to discern – with input from the children themselves – what’s best for each in regards to competition. There isn’t one “best way” for every child; figuring out the preferred path for each one is an on-going, trial-and-error process. We must be willing to set aside the notion of a one-size-fits-all approach to this topic – and so many others.

As a former public school teacher – for nine years at the secondary level – I believe the most harmful use of competition occurs in classrooms around academic learning. I actually don’t see any reason why we should compare one child against another, ranking and sorting them when it comes to their academic education. I know some who claim to thrive on competing with peers for good grades; I was actually one of those kids growing up, but I realized too late that I lost sight of actual learning in favor of high performance. The two are not synonymous and I grieve the opportunities I lost to really learn out of fear that my grades would suffer if I tried. Conversely, I could name dozens and dozens of classmates and former students who’ve spent years feeling “stupid” simply because they couldn’t be “top dog” in terms of class rank. It would be so much better if we employed a different model – not academically comparing one child to any others but, rather, letting a child “compete” against herself by comparing where she was last month and last year to where she is today, and letting each one progress in learning at whatever pace works for the individual.

One of the main reasons competition with academic learning needs to change is that school is compulsory. Kids are required to attend somewhere – either in an institutional school of some sort or at home in compliance with homeschool laws – so they have no viable escape if destructive competition prevails. In contrast, I’d suggest that competition in voluntary activities – sports teams, music and drama, dance, etc. – can be good and can provide a way for kids to develop a healthy understanding of competition. When an activity is voluntary, a child can opt-out if he discovers he lacks interest or skill or – even if he continues – the pressure is lower when he knows he could leave if he chose to. As parents, it’s not always easy to discern whether or not to allow a child to step away from such activities – sometimes making a child keep going is good and other times it’s fine to leave – but when the activity itself isn’t compulsory, at least we can choose.

Competition as a concept is actually neutral. Like a hammer, it can be used for good or ill. Our job is to avoid allowing its use to pound holes in the “walls” of our kids’ lives but to, instead, insure its use for truly building them up.