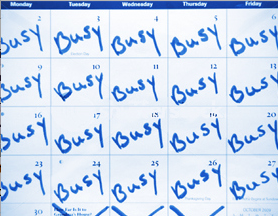 “[It] dawned on me [recently] that I need to really get a handle on my children's activities. I do not want to be managed by their activities; I want to manage them. I need to say no to some stuff. They will survive without [doing ‘everything’].”

These are the words of a wise woman I met via a homeschool moms’ support group – but, of course, her sentiment applies just as well to all moms. It’s also true that this is the perfect time of year to ponder our intentions for our kids’ activities – because, whether our children attend typical public or private school (i.e., following a September-to-May calendar) or we home-educate all year round, most extracurriculars operate on that typical school schedule. As such, everything is “ramping up” – either in the planning stages or actually beginning – right now. Thus, making decisions right now will ease our transition into this coming fall and beyond.

When kids are young, it’s wise – for the sake of awakening their “smarts” and genius qualities – to encourage them to try a wide variety of activities as interests dictate. However, that doesn’t mean doing “everything” all at one time. I have friends who allow each child just one away-from-home extracurricular activity per week for each “season” or semester. Near the end of each season/semester, they talk with each child to determine who would like to continue in the same activity and who would like to try something different. The children don’t clamor to do more because they realize they’ll have opportunities to try new things soon; in fact, they’re relaxed and peaceful – as are the parents – because they’re not constantly running from one activity to the next, and they have time and energy to grow their creativity, imagination, and – very importantly – family unity at home.

As children mature, they often begin to hone in on a particular activity or two, desiring to “go deep” rather than broad. And – assuming we’ve given them measured opportunities to explore a wide variety of options when they were younger – it’s perfectly appropriate to allow them to “specialize.” In fact, if a grounded teenager expresses a strong interest for a particular activity, we do her no favors by forcing her to be “well-rounded” - i.e., compelling her to join in on myriad activities just for the sake of being involved. After all, current passions might indicate potential career paths, and colleges prefer those with deep interest in one area to those who flit from club to club, trying to pad an application. And, even if a strong interest eventually changes, the teen will not have wasted his time because the perseverance he develops via delving into one passion can transfer to something else later on.

As you ponder how God has wired each of your kids and their particular ages and stages, how can you – like my friend – manage their activities this “school year” rather than allowing the activities to manage you? Who will be the boss over your calendar this year?