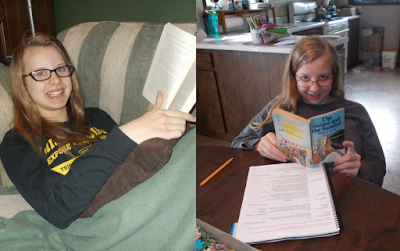 Back in 2011, I wrote about the Readers' Workshop I had developed for my daughters in lieu of using any sort of pre-packaged literature curriculum. At the time, I summarized my rationale by explaining that, "after a child learns how to read, there is a place for further skill development and literary analysis, but that should not be your focus if you intend to grow joyful readers and lifelong learners in your home. [Instead] Readers' Workshop can and will do just that."

The girls are now on the cusp of high school - we officially start that part of our home learning journey in January - and I still hold firmly to the same conviction, in large measure because I actually first used Readers' Workshop with teens in my days as a classroom teacher. Thus, I knew even before my children were born that there would be no reason to throw away delight-directed reading just because a child has grown tall enough to look me straight in the eye.

That said, we've understandably changed a few things about our Workshop as the girls have grown up, so I decided an update was in order. I'll share the same background information as in my original post, and then describe my new secondary-level procedural ideas.

When I was a classroom teacher working with immigrant kids at both the middle and high school levels, I rebelled. I simply refused to pull the dusty old literature anthologies off the shelves...because, even then, I had Charlotte Mason ideas in my head (without knowing it). Thus, I instinctively understood that reading snippets of literature chosen (randomly) by editors in New York high rise office buildings was not nearly as useful - or as motivational or enlightening - as reading whole living books. Similarly, though I once taught Steinbeck's The Pearl and annually enjoyed leading my high schoolers through mandated group study of Romeo & Juliet and Julius Caesar, I shied away from whole-class literature units as much as possible, too.

In the case of Readers' Workshop, that meant every student reading a different book at any given time. Often the books came from the extensive classroom library of appropriate literature I built over the years - and carried with me from the middle school to the high school when I transferred. But students were free to read other books, too, as long as they pre-approved them with me.

I encouraged the kids to read outside of class - the more they read, the higher their "quantity grade" for a semester could be - but class time became work time, not lecture or busywork time. Thus, on most days, we chatted together for a few moments after the bell rang and then the kids got to work (for the next hour or two) on whatever phase of a book each was working. So, if you'd been a fly on my classroom wall, you'd have seen on any given day that some were reading, others were journaling about what they'd just read (a required task that helped me track each one's progress), and still others were working on projects for recently-completed books. They all stayed on task because I'd built trust, communicated my expectations from the beginning and "roamed" the room, checking in with each student and helping as necessary.

I devised a series of projects - at least one that highlighted each multiple intelligence strength - and created detailed instruction sheets and grading rubrics. Thus, when a student finished reading a book, he chose a project and worked on that until it was completed to his satisfaction. When a project was finished, it was put up for display, and the student chose a new book with which to start the process again.

It all ran very smoothly, and I know my students - even the high school seniors - loved it. They weren't free to read anything - they had to choose literature of some sort (not magazines or comic books) and it had to be educationally appropriate - but they had enough freedom of choice that even the reluctant students enjoyed the task. And they had time to read right in class; thus, they actually did it. So, because they were reading regularly, their skills improved as a matter of course; I know they did because I read the daily summaries/narrations, and I saw growth of understanding over time. And then they were allowed to demonstrate their understanding in creative ways through projects that supported their various multiple intelligence strengths.

I knew without a doubt that my workshops were right for kids...and it didn't matter one iota (to my students or me) that my establishment-type colleagues scoffed at me. In fact, when one teacher in my department mocked my classes in front of our shared students, they defended me despite the fact that the only thing the woman ever worked hard at was intimidating them.

But what does all of that have to do with home education - my purpose and calling today?

Well, plenty...because I believe that the best way we can foster a love for literature (and learning) among our own children is to develop a homeschool version of Readers' Workshop with them. And that's just what I've done with my girls, starting when they were eight and nine. 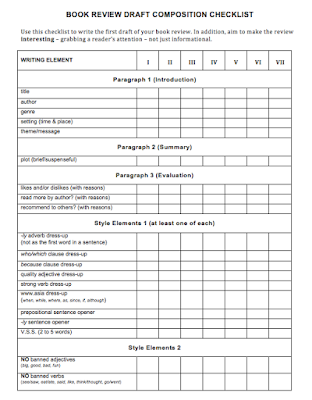 And with all of that, I can almost hear the question bouncing around in many brains: So what about grading?

We homeschoolers often feel we can get away without grades in elementary - and even middle - school. But when we start talking about high school, we are sorely tempted to shove our kids into a school-at-home box - in the case of literature, by making them read pre-digested short story excerpts from an anthology text, look up meanings for vocabulary words, answer comprehension questions at the end of each selection, and then take unit tests...all cut-and-dried "objective" means of compiling percentages that can be converted to convenient letter grades to "prove" that our kids have "learned." In the meantime, of course, we kill our kids' love of reading (and learning) - and we spend their high school years wondering why our once-curious kids suddenly just go through the motions. But at least we've got those letters to plant on the transcript...

I've actually been talking with experienced homeschoolers - those who've graduated several children who've gone onto varied post-high school endeavors, including college - many of whom insist that, while having a transcript is important, including letter grades may not even be necessary. And praise God if that's true! At root, grades are simply a glaring, ugly symbol of the mass institutional schooling system that treats children like products on an assembly line - artificial and dehumanizing (we grade eggs and sides of beef but we shouldn't rate children in such a way!) - not to mention meaningless in the grand scheme of life. And we homeschoolers shouldn't buy into the system's way of objectifying children if we don't have to. So...just in case my girls are blessed enough to meet with progressive employers and/or admissions counselors, I'm giving serious consideration to presenting gradeless transcripts as our first offensive salvo into post-secondary life.

However, I also realize that most people have been sadly indoctrinated into expecting to see grades on transcripts. So we may be forced to jump through the grading hoop, loathsome though it is. Thus, I've been developing grading rubrics for all the girls' studies, including our Readers' Workshop, which will be one component of their credits in "English." With rubrics, students complete concrete, meaningful learning tasks based on clear, measurable parameters they know before their studies even begin. So rubrics respect kids as human beings by giving them all necessary information ahead of time and granting them choice about what level of performance they seek to attain.

For that reason, rubrics are the least offensive of all grading systems, and if I must provide grades for my girls, I can at least stomach rubric-based grades. And for me, the standard for the Readers' Workshop component of an English credit is simple: each of our terms is based on 37 learning days so if a child completes Workshop activities - either reading a chapter or working on a project/review - on at least 35 of 37 days, she will earn the top score (a 4) for Readers' Workshop in that term. And doing Workshop activities for fewer days during a term will result in a lower score (from 3 to 0). Of course, I could make the Workshop rubric more detailed and complicated - rubrics can be designed however one desires - but, because I know my girls will read and that they know how to write appropriate reviews, and also because the Workshop is but one component of an English course, I've chosen to keep it that simple. And to calculate a grade, I'll just average all of a child's rubric scores for all components of her English credit during our five annual terms and use a 4-point scale (i.e., the system used for calculating a grade point average or GPA in most settings) to translate that to a letter grade.

In the end, rubrics will give us grades if we "need" them. But what's most important is that my girls will be continuing to enthusiastically read a wide variety of literature according to each one's interests. And because they'll be reading from a foundation of personal motivation, they'll be absorbing and retaining knowledge and principles as a matter of course. That's what Readers' Workshop does - for older kids just as well as youngers.