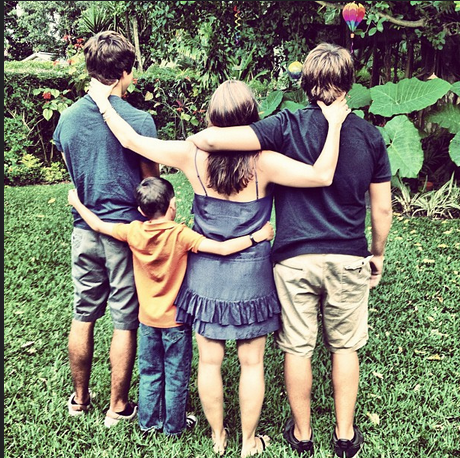 Last year in August, I saw a few examples of “celebratory moms” – the women who posted pictures or videos of themselves jumping for joy and dancing at bus stops as their children headed off for the first day of school. That was bad enough. But now it seems that those women’s antics have launched a trend, because I could hardly go a day on Facebook all through August without seeing several more moms joining the “celebration” gang. And it turns my stomach.

Some people think this bothers me because I home-educate and, therefore, must be “judging” mothers who’ve chosen to send their kids to school. But, honestly, has nothing to do with that. My beef in this case is not with where the children attend school; rather, it’s with the heart attitude the moms display via their behavior and the damage inflicted on children’s hearts as a result.

I know the argument in favor of the displays: “They’re just having fun. They really do love their kids.” And that may be true. However, choices matter. And actions speak louder than words. A mom can say, “I love you,” all day long. But when a child observes activity that glaringly communicates her joy at being “free” of him, she erases the merit of the words, shattering his sense of security and belonging. One child told me, “If my mom did that, I’d think she didn’t want me.”

I understand that parenting is tiring; in fact, it’s exhausting at times. And every mom enjoys an occasional break to engage in a grown-up activity – reading a book with more words than pictures! – or to meet up with friends somewhere other than the McDonald’s Playland. But there’s a vast difference between scheduling in some personal time on the one hand and rejoicing over the absence of one’s children on the other.

I’m also very aware of myriad parenting situations that are difficult, to say the least: the severely autistic child whose needs sap a mom’s reserves; the strong-willed toddler who defies every attempt at correction; the rebellious adolescent who insists on flouting a family’s every rule and expectation. But even in those cases, the answer is never to scapegoat the child by “celebrating” the chance to “get rid of her.” A mature woman will seek help, respite, and counsel – not celebration – knowing that her children’s hearts hang in the balance.

Sadly, our culture isn’t going to change anytime soon. Over the last few generations – most notably since the Roe v. Wade decision in 1973 – children and the family have been systematically devalued. Thus, instead of celebrating the fact that “children are a gift from the Lord…a reward from him” (Psalm 127.3, NLT), we’re encouraged to “celebrate” any freedom we can gain from the “burdens” they inflict upon us. And the jumping-for-joy moms have bought the lie, hook, line, and sinker.

But Jesus said that those who claim to follow Him "are the light of the world ­­­­– like a city on a hilltop that cannot be hidden” (Matthew 5.14, NLT). So we need to choose to be different. We need to actively celebrate our kids’ presence, not their absence from us – primarily so they’ll know without a doubt that we really do love and cherish them, but also as an example to the parents around us. In other words, we each need to choose to “be da mom,” in word and in deed.

So if your child attends school away from home, don’t cheer when the bus pulls away. Instead, encourage him at breakfast to stand strongly in the Lord’s strength and to be a diligent, persevering learner – and then spend the time that he’s on the bus each day praying earnestly for him. When a neighbor vents about how “terrible” her child is, don’t commiserate by providing a laundry list of your own child’s faults; that just fuels the flame of disregard for all kids. Instead, simply acknowledge that you hear her concerns, offer practical advice if she’s open, and promise to pray for her. Then seek the wise counsel of a godly, trusted friend – in private, out of your child’s hearing – when you personally need help as a parent yourself.

It’s hard to go against the cultural flow. It’s so much easier to join in the “harmless fun” of “pretending” to dislike one’s kids. But God expects better of us, and He knows we can do it for the sake of the children because He indwells us with His Spirit. So at the start of this school year and always, don’t join in with the crowd. Instead, choose to be different. Choose to “be da mom.”