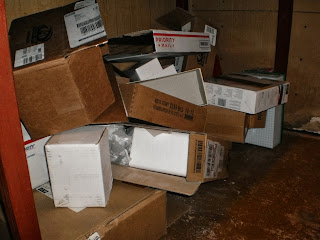 To say that I enjoy being organized is like saying the pope is Catholic. I’m simply a person who gravitates toward ordering my world, naturally creating places for everything and keeping it all there.

I’m grateful, though, that mentors in my early years as a mom convinced me that keeping strict order and maximizing a child’s potential don’t necessarily mix. If I hadn’t accepted that truth, I’m sure I’d have been the mom following her kids around, picking up each toy the minute one of them appeared to be done with it.

I didn’t abandon organization. But I put it in its proper place, allowing my kids to freely play all throughout the day – which is, of course, how young children learn – and typically picking up just once each evening. I sometimes felt overwhelmed by the apparent “clutter.” But that arrangement allowed my kids to be creative and inventive, using each toy in several different ways each day as they encountered it at different times.

As they got older, both girls showed a penchant for crafting and building. And it wasn’t long before they realized they could turn cardboard boxes into works of art and architecture. Of course, one girl’s craft spawned an idea in her sister, such that it sometimes seemed they were asking for multiple boxes every day.

I had the boxes; as an organizer, I had a designated “box nook” in my basement under the laundry table. I saved boxes throughout the year, planning to use them to hold Christmas presents. But I stressed about the continual box requests. For one thing, what would I use at Christmas if the girls used up all my boxes? And, secondly, where would we keep the many, lovely – often quite large –finished projects? They couldn’t be stacked in the box nook once they’d been cut up and taped into new configurations. Instead, they were given new homes, spread throughout the entire second level of our house and, often enough, even in our living room so the girls could invent new games with them each day. The designs were very clever, but they messed with my sense of organization.

Thankfully, though, I remembered that houses are meant to be lived in; they are not museums. And if I wanted my kids to become increasingly inventive, I had to provide them with space and materials with which to get their hands busy…and dirty. We could still make room for organization – the girls and I worked together to devise a system for “super-cleaning” when necessary – but we determined that enabling and empowering our kids to express their natural desires to make new things was more important than perfect order.

Kids need time and space and “stuff” with which to invent. How are you contributing to the process?