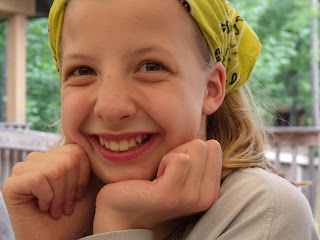 One of my daughters struggles with anxiety. We’re not sure why, though the cause seems to be a combination of genetics and a sensitive temperament rather than any significant traumatic experience. The trigger, though, occurred a few years ago when she began to wrestle with insomnia. She became extremely agitated about not getting to sleep “quickly enough” for several nights in a row. Of course, her anxiety magnified the insomnia. And then she began to be anxious about a number of other things as well.

Working through the insomnia was a long process, but thankfully it’s finally abated. So we’re now using the same tools to manage her other anxieties, regularly reminding her to consciously choose her faith and the facts above her feelings. And we’re grateful to be seeing good progress.

One thing I noticed on this journey is how the anxiety caused Rachel to cling to me for security in a way she never had before, not even in infancy. In fact, she was a very easy-going baby who preferred rolling and later toddling about to cuddling with me during her waking hours. As my husband often pointed out, she was definitely “imprinted” on me as her primary caregiver. But she had a free spirit, very interested in exploring the world around her.

So it came as quite a shock to us all when, at age nine, she was so overcome by anxiety that she needed my near-constant attention to bring her any sense of peace and security. In fact, I need to admit that the situation was both scary and frustrating. Why was it that this previously content-and-calm child now clung to me just when others her age were becoming more internally independent?

It took time – and the Lord’s work on my own stubborn heart – before I came around. But I eventually learned that Rachel doesn’t need to be like any other child; therefore, it didn’t matter what others her age were feeling or thinking. Rachel hadn’t needed extra maternal security as a baby and toddler. She needed it later. I also sensed that meeting her need – rather than chastising her for it – was the best way to help her through it to the other side. Some friends and family thought I was coddling her, but I chose to trust the Lord over our cultural norms. And, as a result, Rachel’s moving forward through her anxiety, not getting stuck in it.

Now, though, I’m working very diligently with her on an essential truth she needs to embrace: ultimately, her security cannot be in me. I’m an appropriate temporary vessel, but Rachel knows it’s really the Lord in whom she must place her trust. After all, I’m human and fallible; I will disappoint her. And I won’t always be here.

We talk about that regularly, and she’s now far enough along that I can challenge her at times to rest in Him rather than me. But in her crisis she needed to know there was a physical person in whom she could trust. And I needed to be willing to sacrifice of myself to be that secure person for her.

What about you? Can you be security for someone right now? Or do you need to ask another to come alongside you during a rough patch? And do you know the One who is your ultimate security?