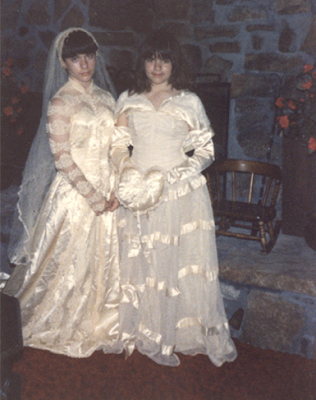 My daughters and I recently spent the afternoon with good friends. While the other mom and I enjoyed catching up with the happenings in each other’s lives, the kids played, alternating between the yard and the basement. They started out with a variety of improvised Barbie games, the three girls including the lone boy by giving him the vintage GI Joe my girls had toted with them. Then they played a round of soccer before heading to the basement.

When I came to tell them it was nearly time to go, I found the entire room in disarray and each child decked out from head to toe. Later, my daughters explained that they’d all donned dress-up clothes and had spent their time making up random games in which each played various parts, focusing on storylines set in the medieval era. And it was clear when I came down that all four could have continued on, unabated, for another couple of hours if we’d let them.

The kids are ten and a half, 11, 12, and almost 13. They never complained of boredom or asked to plunk down in front of a movie or video game. And, though my friend and I would be the first to admit that we’ve made plenty of parenting mistakes, this has always been the case for our kids. They’ve always enjoyed imaginative play, and still do despite how rapidly each is careening toward adolescence.

This wasn’t something my friend and I necessarily planned when our kids were babies. But in hindsight we can see that – by providing a variety of simple, non-electronic toys, by carving out daily time for play, and by limiting our kids’ media consumption – we each ended up creating an environment that has fostered a love of creative, productive play in them even now.

It’s not that we’re discouraging them from “growing up.” In fact, my friend and I are both working diligently to help our kids mature toward a healthy, responsible adulthood. But because we’ve always provided time, space, and opportunity for playfulness, we see that they are retaining childlike wonder, joy, and creativity even as they grow out of childish behavior.

I grieve when I see primary-aged children and even preschoolers glued to ipads and Kindles, which numb them from discovering their own innate creativity. I lament the over-scheduled lives some families lead – in which the children are shuttled from one organized activity to another –knowing that such busy-ness eliminates the possibility of kids having daily unstructured time in which to play as their imaginations dictate. There is a time and place for all of that. But if we want our kids to develop the genius quality of playfulness, we must let them play – really play – instead of merely entertaining and occupying them.
*****
Photo Credit: Shanna Riley