Speak the Truth; Speak in Love 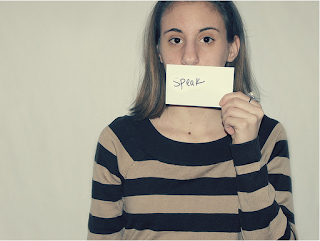 A few years ago, I heard a quote attributed to an early 20th century woman named Maggie Kuhn. It’s become one of my favorites:


Stand before the people you fear and speak your mind – even if your voice shakes.

I don’t think Ms. Kuhn was advocating the type of reckless verbal incivility we so often encounter these days. Rather, as a devout Presbyterian woman living when she did, I’m confident she was referring to the type of bold but considerate speech that comes when one is standing on principle, not just spouting personal opinions as loudly and defiantly as possible. But, on the other hand, it also seems quite clear that she was exhorting people against remaining silent. Instead, she implored folks to say something in the face of wrong-doing or injustice.

That’s a tall order nowadays. On the one hand, good-willed, thoughtful people understandably want to avoid offending. However, taken too far, that notion can morph into a twisted, politically-correct assumption that speaking out at all is “intolerant” – and fear of being viewed as such often stifles us from saying that which we know we really ought. But it is possible to effectively walk the tightrope between being a rude blowhard on the one hand and a doormat on the other.

These days, I’m known as a “bold” person – but that hasn’t always been the case. In fact, until little more than half a dozen years ago, I more closely resembled a church mouse than anyone Maggie Kuhn would have recognized in her quote. The change was a process upon which I purposely embarked because I knew it was healthy – for myself personally, my marriage, my children, and my broader relationships. It’s something I worked at consciously for a long time, at first often forcing myself to speak through tears because I was that afraid.

True, I sometimes find in hindsight that I’ve unintentionally crossed a line – having, perhaps, spoken in anger rather than love. So, as necessary, I apologize and do what’s necessary to repair damaged relationships. But I really wouldn’t go back for anything.

Think about it. What good ever comes from timidity? When we see wrongs perpetrated in our homes, schools, or communities, but say nothing, the status quo of hurt, abuse, and manipulation continues. When we speak boldly in love and with right motivations, there’s a chance that things still won’t change…but there’s also a very good likelihood that something good will come of it.

Is that a chance you’re willing to take for those you love?