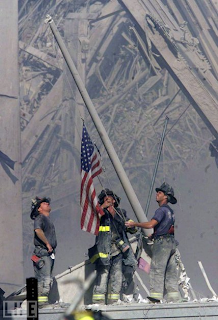 Where were you when you heard about the 9/11 attacks?

My older daughter, Rachel, was three months old, and that spring I'd left my public school teaching job to devote myself to motherhood. I'd also just recently discovered I was already expecting her sister, Abigail. On that Tuesday just before 7:46 Central Time, I'd taken care of Rachel's morning bottle and had set her to happily roll around the living room floor - she was an early mover! - while I grabbed something for breakfast.

I'd been watching The Today Show to catch the morning news and, as I returned to the living room with my peanut butter toast (isn't it funny how I remember a detail like that?), I saw an image of black smoke billowing from a tall office building. I recall Matt Lauer speaking of the possibility of an accident at The World Trade Center, presumably with a small airplane. I wasn't even sure what The World Trade Center was.

Just a few minutes later, I witnessed the second plane barrel into the other tower. Matt Lauer and whomever he'd been interviewing about the "accident" stopped short when they realized it was an airliner, not a small plane, and that the collision was obviously purposeful. That was, perhaps, the only time I've ever seen a newscaster at a loss for words.

Just a few minutes later came word of the crash at the Pentagon. And then, not long after an expert asserted that the towers "could not fall," I saw one sway and thought, "It's going down." Of course, it did just that a short time later, followed by its twin.

By this time, Lauer and his co-hosts had mentioned something about a plane in Pennsylvania. Was it coming back to Washington? If so, what was its target? Were other planes headed elsewhere - Chicago, Dallas, Los Angeles?

That petrified me. Bad enough that this - what they were starting to label as terror attacks - could occur on the East Coast. But, if they were going west...well, Chicago isn't that far from here. Not only that, my sister-in-law lived less than an hour from Chicago, and my best friend lived in Fort Worth. How bad was this going to get?

I remember feeling heartened when President Bush addressed the nation from the Florida elementary school where he'd been reading to a group of kids...and stunned as images rolled in through the day: ash-covered New Yorkers fleeing the falling towers, a gaping hole in the side of the Pentagon, smoke billowing from a field in Pennsylvania.

I was glad Rachel wasn't old enough to know what was happening. I wanted to keep watching so I'd know if there were other planes (or something else), but I would have shut it off if she could have been traumatized.

And I thought, "What kind of world have I brought my child - and, soon, her sibling - into?"

I watched the memorial service a year later - glad that my then-toddler and new baby couldn't understand - and caught parts of the fifth anniversary service while my two then-preschoolers and the little girl I'd just begun babysitting played in the other room with Fisher Price toys and Polly Pockets.

But I knew there'd be a time when my husband and I would have to start telling them about the events of that day. In fact, we've done so in tidbits for the last two or three years. Telling the truth while also seeking to preserve their innocence and sense of security has been a challenge.

Today they came into church instead of going to Sunday school, in part because I knew that the service - from a special video and the prayer offered by the commander of the local Navy Reserve Center to the music and sermon - would focus on 9/11. I want the girls to remember this service because I want their focus to be not on horrid acts perpetrated by evil men, the terror that the events of the day still elicit, or the losses of freedom we've endured as a nation since. Rather, I want my girls to learn, first and foremost, that God is bigger than all of that - that He is sovereign and that, as our pastor so eloquently reminded us today, we will one day see His purposes for allowing even the tragedy of 9/11.

Our Scripture for the day was Psalm 46 (ESV):


God is our refuge and strength,

There is a river whose streams make glad the city of God,
the holy habitation of the Most High.
God is in the midst of her; she shall not be moved;
God will help her when morning dawns.
The nations rage, the kingdoms totter;
he utters his voice, the earth melts.
The Lord of hosts is with us;
the God of Jacob is our fortress.

Come, behold the works of the Lord,
how he has brought desolation on the earth.
He makes wars cease to the end of the earth;
he breaks the bow and shatters the spear;
he burns the chariots with fire.
"Be still, and know that I am God.
I will be exalted among the nations,
I will be exalted in the earth!"
The Lord of hosts is with us;
the God of Jacob is our fortress.

That is what I want my girls to know most of all - in light of 9/11 and everything else that will happen (to them and around them) in their lifetimes.