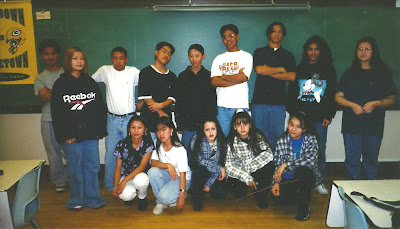 During my nine years as a public school teacher, I worked hard to help immigrant teens - including these students - improve their English skills. In fact, though presented several times with the opportunity to transfer to “easier” jobs in “regular” language arts, I specifically chose throughout my tenure to teach kids in the English as a Second Language department. My job was time-consuming, as I had to modify everything and do other extra work at which my mainstream colleagues would have balked. But I never dreamed of moving on.

Chief among several reasons for this choice was the joy I witnessed in nearly every one of my students – even (in their own ways!) those who struggled academically or behaviorally. Simply put – and in marked contrast to the majority of their peers in “regular” classes – they were a blessing: curious, engaged, diligent, respectful, and personable. In addition, most of their parents maintained a high level of interest in their children’s learning and behavior, and regularly reminded me that they’d to do whatever they could at home to make my job easier. In fact, I was often embarrassed by the deep respect given me.


I’m convinced that this joyful attitude among the students and parents alike emanated from gratitude. You see, my first students and their parents were mainly Southeast Asian refugees who had endured incredible hardships: witnessing the brutal murders of family members, barely escaping death themselves, and languishing for years in refugee camps. Thus, they viewed the opportunity to relocate to America as a tremendous gift. And, though their lives here were hard too, they demonstrated their gratitude by joyfully embracing every opportunity given them – including the gift of education for the children. Later, I taught many Hispanic kids whose parents immigrated voluntarily. But they, too, were extremely grateful for their opportunities here because they’d escaped very difficult circumstances in their home countries.

In contrast, I knew that, if I transferred to a “mainstream” job, I’d face the entitlement mentality exhibited by very many native-born kids and their parents – those who didn’t realize how good they have it here and were, thus, ungrateful and joyless. Yes, that’s a generalization – many “regular” students work hard and strive to maintain positive attitudes – but it’s also reality. And it would have been harder for me to face a classroom full of kids like that than to do all that was required of me in my ESL job.

Joy flows from a grateful heart, and joy brings peace even in difficulty. Whether teacher, student, or parent, where are you with all of that today?