How Are They Smart? 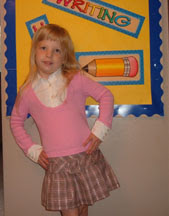 One day a couple of years ago, I clearly witnessed some of what parenting experts, such as Dr. Kathy Koch, Ph.D., say about our “multiple intelligence” strengths.

At that time, my younger daughter, Abbie, was four, and Rachel had recently started kindergarten. I’ve always worked hard to avoid labeling their learning strengths and weaknesses, as they are simply too young for us to know much of that with any certainty just yet. But sometimes it is impossible to miss the clues.

That morning, Rachel delighted to comply when I asked her to count by ones to 79. She bounded into the kitchen to inspect our wall-mounted number display. Then she counted and, as she hit the 20’s, she began hopping as she said each number. At the 30’s, she started skipping around the kitchen table. On other days when she had attempted this task sitting down, she’d gotten mixed up; that day, she didn’t miss a digit.

Fast forward to lunch. As on most days, Rachel exclaimed, “Let’s talk!” It mattered little what we talked about: a movie or book, an outing, a recent dream. She simply needed to verbalize the myriad ideas in her head and even, as Dr. Koch says in her book How Am I Smart? A Parent’s Guide to Multiple Intelligences, to enjoy the feel of the words in her mouth.

In the afternoon, she plopped onto the couch with a favorite book, telling herself the information she’d memorized from previous read-aloud sessions. Later, she described to me the intricate biography she had just imagined for the Transformer doll in her hand; for her, it was just as important to tell the ideas as to think them up in the first place.

At one point, she broke from her monologue to turn on the CD player. Then she improvised some choreography for herself and the Transformer and belted out Hark! The Herald Angels Sing as she leaped and spun.

On that day, Rachel clearly demonstrated at least three of the eight documented multiple intelligence strengths (a.k.a., ways to be “smart”): body, word, and music. According to Dr. Koch, “body-smart children think by moving and touching,” which explains why Rachel found her counting assignment much easier when she moved than when she was still, as well as why she chose to dance when the music was on. “Word-smart children think with words, and when they’re excited, they almost always talk;” that definition explains Rachel’s desire to talk at any opportunity and also her ability to tell detailed stories using rich vocabulary. And her strong desire to both listen to music and sing along is because “music-smart children think with rhythms and melodies.”

In How Am I Smart?, Dr. Koch says that Howard Gardner, the “father” of the multiple intelligence theory, “determined that everyone is born with…eight…intelligences.” Thus, in addition to being body-, word-, and music-smart, each person also has five other intelligences: picture smart, logic smart, nature smart, self smart, and people smart. Drs. Gardner and Koch acknowledge that “each intelligence has to be awakened, but they’re there, built into each child at birth.” Which means that Rachel and Abbie – and each of your children – are, indeed, smart in eight distinct ways!

Now, to be sure, the Lord is as creative here as He is in making snowflakes or in using a limited number of lines and whorls to stamp every person who’s ever lived with a unique fingerprint. So each individual has a different mix of the “smarts.” For example, I am very word- and music-smart, and I’m fairly body-, self-, and picture-smart , too. But I’m not very nature-smart; I do not much notice the variety of plants and animals around me and, frankly, I don’t really enjoy being outdoors. But according to the theory, I do have some nature smart, no matter how limited.

Another important thing to remember, particularly as we apply the theory with our children in mind, is that every intelligence has to – and can – be awakened and developed. In fact, the smarts will not sufficiently grow and become useful in a child’s life unless they are brought to light and then exercised.

One way to do this is to expose children to a wide variety of different experiences, starting in infancy and continuing through adolescence. For example, take them to music concerts – whether free city band shows in the park or symphony performances. Enroll them in “physical education” classes – dance, soccer, T-ball, gymnastics – and (within reason) allow them to try different sports at different times (instead of forcing them to choose one focus too early). Make available some simple but valuable “learning toys” – Lego’s, intricate puzzles, Sudoku – to develop logic smart. Provide opportunities for both time alone (for self-reflection) and group interaction. Incorporate nature walks and visits to zoos and aquariums into your curriculum. Encourage drawing and crafting, both as a part of schoolwork and just for fun. Allow your children the means to write or otherwise record the stories that fill their heads with words. The possibilities are only limited by your imagination and ability to research the options!

The constraints inherent in many traditional school settings – large classes, discipline issues, the pressure to “make” children test well – present many challenges for public and private school educators who want to acknowledge and develop each individual’s multiple intelligence strengths. Thus, in typical classrooms, the emphasis and value are often placed on word- and logic-smart – the intelligences that can most easily be assessed by seatwork and paper-and-pencil tests. So children who have high levels of one or the other smart do well in those settings and are labeled (by themselves and others) as “the smart ones.” That’s wonderful for those children because their smarts are regularly used and acknowledged.

But where does that leave other children, those whose word- and logic-smart might be relatively low but who excel in other areas? All too often, for example, the body-smart child is labeled “ADHD” – even without a formal, medical diagnosis – and parents are pressured to medicate her. Or the picture-smart child is disciplined for daydreaming, even if the doodles in his notebook are his way of listening to and appropriating into his memory the botany lecture. And a self-smart child may be deemed “anti-social” and, thus, become the target of bullies.

Some of that is unavoidable in traditional schools, even if particular teachers do their best to incorporate activities that allow expression of all the intelligences. However, in home education, we have a much easier job in that regard. Undoubtedly, one of the reasons we homeschool is to allow each of our children the freedom to grow and develop as God has ordained; we know that each child is fearfully and wonderfully made (Psalm 139:14) and that the Lord has a unique plan for each one (Jeremiah 29:11). And so in homeschooling, we naturally provide individualized instruction.

And in spending so much time with your children, you surely know each one quite well; in fact, you may have been able to loosely categorize the “smarts” of each one from my brief descriptions here. However, I’ve barely scratched the surface. And – as with any building task – good tools help immensely. So I highly recommend that you obtain a copy of How Am I Smart? In it, Dr. Koch has explained in layman’s terms the theories developed by Dr. Gardner and others. And she has packed the book with practical examples for identifying and working on each smart. Furthermore, Dr. Koch loves the Lord and approaches this topic from a thoroughly Biblical perspective.

I noticed Rachel’s body-, word-, and music-smart abilities that one day because I’d already seen them in many ways, even from her infancy. Of course, God is still developing much in her, so I cannot yet see a final picture of who she is being formed to be. But I got a glimpse.

And, while Rachel is a unique creation, she is in one sense like every other child. Because, like her, each child has been given a specific, wonderful mix of the eight intelligences. What an honor we have as parent-educators to witness the day-to-day unfolding of God’s plan in them.