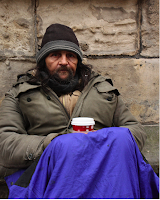 
The other day, I pulled into the downtown library’s parking lot and noted with dismay the presence of two grungy-looking men near the entrance. From the safety of the parking stall, I scrutinized them in my rearview mirror, quickly determining that they must be homeless and biding time until the shelter a few blocks away let them in for the night.


One crouched against the wall with his head down, hugging his knees. Whether he was passed out or merely attempting to shield himself from the stabbing wind, at least he probably wouldn’t bother me, I reasoned.

However, the other man – who sported stringy, shoulder-length hair and several layers of grimy clothing – had meandered away from the wall and seemed to be studying my van. He stopped near a trash can on the sidewalk, puffing away on a cigarette.

I sighed. There was nothing to do but make my way past him. Praying he wouldn’t approach me, I gathered up my armful of books, opened the car door…and hit auto-lock before even stepping out.
Then I secured my purse and trudged into the wind, purposing to keep my gaze down.

Nevertheless, I could tell through my peripheral vision that he stared at me until I was past him. But at least he hadn’t said anything. And then, blessedly, I was ensconced in the warmth of the library. I wondered briefly if I should tell the librarians that two men were “loitering,” but opted against it since they hadn’t harassed me. “At least not yet,” warned a little voice in my head.

I had to pick up a bunch of books – volumes I’d put on hold from one of several computers in my quaint, warm house.

I found them and lugged them over to a nearby table for inspection. But then, just as I opened the first one in the stack, he – the dirty-haired homeless man – walked right up to me.

“Oh no! I was an ‘easy mark,’” I thought. And I instinctively – and not at all subtly – reached for my purse.

Then he did say something, but my panicked thoughts drowned out his words so I said, “Excuse me?”

I relaxed my grip on the purse, trying not to be obvious. But then justifiable shame washed over me.
“Oh, thanks,” I muttered, offering a wan smile.

He smiled back self-consciously, as if to say, “Sorry I don’t look nice,” and then nodded politely before wandering off toward the magazines.

I had the urge to call after him – to say, “Hey, can I give you five bucks?” But that would have been stupid.

He didn’t want anything from me. He just wanted to be a Good Samaritan – to serve a fellow human being as he was able.

I don’t know why he’s homeless. Is he a vet...a victim of the poor economy...a drug addict? And I don’t know how seriously he’s trying to get his act together. But that’s not important. Fact is that I have a lot to learn from him – just as soon as I yank this tree limb out of my eyeball.