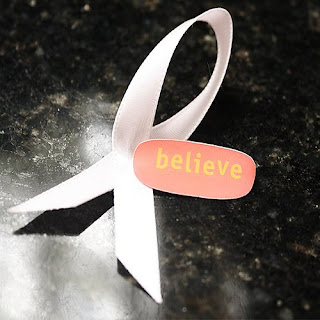 I closed the changing room door and turned the lock. And then I couldn't contain myself any longer, and the sobs came - quietly because I was in a semi-public place, but they absolutely wracked my body. I sucked in deep gulps of air and sank into a nearby chair, burying my face in my hands.

That was this past Thursday, August 27, 2009, and I'd just received confirmation that the "lump" my nurse practitioner had found in my right breast during a routine physical a week earlier was not cancer or any other terrible diagnosis. Instead, an ultrasound had just unquestionably revealed that the "lump" was really just a bump caused by a simple clogged sebaceous gland. The cure? Time and some warm compresses.

My tears were an outpouring of relief as well as a release of the stress I'd carried with me for the previous seven days. I'd asked dozens - perhaps a hundred or more - to pray, and I'd rejoiced when I received a letter on August 25 that my mammogram had come back all clear. But until I knew for sure what the bump actually was, I'd battled fear almost every waking moment for a week. The anxiety didn't consume me because God was faithful to bring a measure of peace. But it was consistently with me for that week, gnawing away just under the surface of my thoughts. I knew it existed, but I didn't realize how much of it there was until it flooded out of me in that dressing room.

Then, on Friday night and this morning, I was blessed to attend a Beth Moore conference in my city. I'd known about the event for months and always planned to go, but I'd kept forgetting to register. I finally signed up on Tuesday, just hours before getting the "all clear" mammogram letter in the mail. Even as I filled out the online form, I feared I was wasting the money because I thought I might be in the hospital getting a biopsy instead. But I obeyed God's promptings to trust despite my angst.

And so, of course, on Friday night I found myself listening to Beth's wise teaching and then worshiping locally with some 6,000 other ladies (and a few brave men!) - knowing that, in addition, over 90,000 others were participating worldwide through a simulcast of the event. I smiled to myself a few times during the evening, grateful to be there because it was a sign of the bullet I'd just dodged.

And then the worship team started playing their final song for the night, "In Christ Alone," and I lost it.

The song was my friend Susan's favorite hymn. Susan - my lovely, accomplished friend, a physician and single mother - succumbed to lung cancer in May, 2008, leaving behind her two young daughters. She was only 47 and had been one of the healthiest people I knew. So for her to get cancer of any kind - let alone lung cancer - was simply inexplicable...the most tragic thing I've ever witnessed.

Despite lung cancer's terrible prognosis, she fought it with all her might, lasting 18 months in order to be with her daughters for as long as possible. And she never, ever gave up on God - even though she did not understand why such a horrible thing was happening. Instead, her faith grew deeper the sicker she got, as did her desire to remain His servant for all of her days on this earth. So she insisted on being the piano accompanist at our church women's retreat just six months before her death, and during rehearsal one night she told us how she loved "In Christ Alone."

Of course, now that Susan is with the Lord, she has no more pain or tears and she exalts in worshiping Him constantly; she can also see God's big picture and now understands how her death will be used by Him, in her daughters' lives and for others, too. But I still weep every time I hear the song because - though I accept that God's plans are perfect in the long run - Susan's death still looks tragic to me on this end. 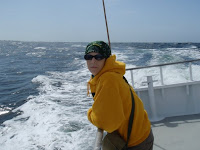 On Friday, as I tried to squeak out a few chords in between my rolling tears, I also remembered another young woman from church, 41-year old Deanna, who died of a rare cancer, leiomyoscarcoma, this past May. Deanna's two daughters are teenagers, and Deanna's loving husband is caring well for them in her absence. But her death, too, is difficult to comprehend on this side of Heaven. And as she came to mind, I could only think one thing: "Why me, Lord?"

Why did Susan and Deanna - both only in their forties, both mothers to young girls, both very health-conscious, both way more Christ-like than I will probably ever be - get cancer and die in their prime while I merely have a plugged-up gland and will be fine for the foreseeable future? Why did I get to rejoice on Thursday while they each had similar tests not long ago that revealed grievous news?

I have survivor's guilt.

Of course, there is no logical answer to my questions from a human perspective. It is simply not "right" that I should be perfectly healthy while those two women - similar to me in many ways - became terminally ill. And I know that neither one would want me to feel bad; for one thing, they would (and do!) rejoice in my good news and, for another, they both now have a complete understanding of God's purposes for what they went through and see how He will work their tragedies for ultimate good.

So as I listened to Beth Moore today and then joined in corporate worship, God made several things clear to me. First, it is right for me to rejoice in His mercy to me in this recent health scare; in fact, I need to be falling all over myself with praise over it! Second, I need to understand that He has sustained my health at this time for a reason. So - even though I wept again when we sang "In Christ Alone" this morning - I don't need to feel bad; instead, I need to say, "Okay, Lord. I'm here today. What have you got for me to do?" Third, I need to remember Susan and Deanna - to realize how fragile and uncertain the gift of a long future on this earth is - and, thus, not take for granted my time or squander my days on foolishness. Fourth, I need to try doing just a little of what Susan and Deanna mastered: the art of putting the Lord first, even above my passionate love for my girls - of making Him my first love no matter what comes my way down the road. Because I want to do what they did so well: love and praise the Lord even in tragedy, honor instead of curse Him even when they did not understand, draw others to Him through their trust even as they went through hell.

God showed me a lot of other things at the conference; hopefully, I can meditate on and write about some of that later. For today, though, I'm focusing on this: I don't know why I have been spared the grief of a health issue for now, but it's a huge wake-up call to me, and I need to take it and run with it - to the praise and glory of God.