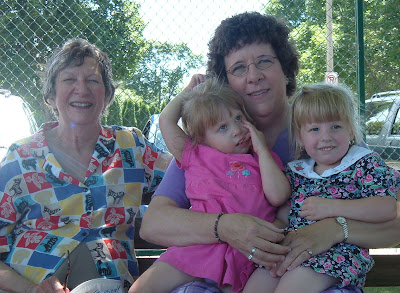 In June 2005, I took this picture of my then-three-and-four-year old daughters with Dr. Kathy and her mom, Arlene Koch. We celebrated Kathy’s 50th birthday at a little community zoo; later, Arlene sprung for ice cream, and Kathy and “Grandma Koch” perused the girls’ many photos in my most recently completed scrapbooks.

On July 13 of this year, Arlene passed away following a seven-year wrestling match with cancer. I attended the funeral, where it was obvious that Arlene was deeply loved by her family and many, many friends – some of whom had known her for more than 70 years! Tears mingled with laughter as people recounted story after story about Arlene – her tradition of serving sloppy joe sandwiches on Christmas Eve… the camaraderie built during couples’ get-togethers and family trips…how her rich alto voice joined in a hymn sing with Bible study friends just three weeks before her death. People could have continued all afternoon with their memories – testament to the fact that Arlene was an amazing woman.

Arlene wore many hats in life – including one particularly floppy one she favored for Red Hat Society gatherings! But I observed that she treasured her title as Mom/Grandma more than anything else. In fact, I believe she understood that she’d been called to that role and, therefore, did her best to fulfill it as God intended. Not that she planned and schemed about being “The World’s Greatest Mom;” in fact, she probably didn’t even read very many parenting books – if for no other reason than that no one aside from Dr. Spock was available when her children were young.

Nonetheless, she was a wonderful mother - because she lived as she knew in the core of her being that she should. That is, she willingly put others’ needs before her own and, thus, admirably served her family first and foremost.

Being a servant is not politically correct nowadays. We contemptuously associate the word with being “servile” and our culture expounds the value of putting “self “above all else. But according to Jesus, placing others first is a high and noble calling.

I can attest to the fact that Arlene was not “servile;” she had plenty of strong opinions, which she expressed whenever appropriate – among family members and in the community. She also did not sacrifice her identity; in fact, she pursued many individual interests and found time to be involved in various organizations throughout her life. Nor did she rely on her role as Mom to give her a sense of worth; she treasured being Mom, but she knew that her worth came from being a deeply loved child of God.

Yet, she knew that God had given her the huge task of putting her children’s needs above her own. She cherished that great responsibility and, I believe, determined to do it for the glory of God. And so she excelled at it and lived a joyful life of service.

Arlene's face won’t grace multiple magazine covers this month; nor will we find perpetual news coverage of her life. But she reaped two amazing rewards – treasures we should all pursue. First, she could clearly see that God had blessed her family because of her devotion to Him and to them – just as He promises to do in Deuteronomy 7:9. Second, when she met the Lord at the gates of heaven, I have no doubt that the first words out of His mouth were, “Well done, Arlene, my good and faithful servant.”

In response, she surely blessed Him with a smile just like the one in this picture.

*****
Deuteronomy 7:9
Know therefore that the Lord your God is God; he is the faithful God, keeping his covenant of love to a thousand generations of those who love him and keep his commands.