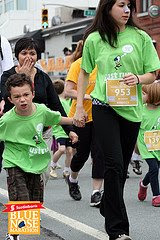 A few weeks ago, I went with others from my church to encourage the runners in our city’s annual marathon. We lined a bridge at Mile 20, clapping, cheering, and high-fiving as the athletes jogged on. Some were so focused they didn’t seem to hear us; most, however, noticeably brightened as we called out, “Way to go! You can do it!” And we were rewarded with many happy nods and grins – whatever they could give us without throwing of their strides. Almost 9,000 of the 10,000 registered runners triumphantly crossed the finish line later that day, an accomplishment none will soon forget.

If you’re a teacher, you’ve either just finished or are on the verge of completing your own marathon: another school year. As the learners, your students are the runners – the ones who are reaching for a prize at the finish line. But – like those of us on the bridge – your role has been essential. Your encouragement and praise have prodded your students to keep going when they’ve hit walls throughout the year. And you’ve been even more than that because you’re also a coach – the one who’s equipped them with the knowledge and training they’ve needed to succeed.

Like elite runners, some of your students have more natural ability than others; as a good coach, you’ve challenged them run as quickly and as far as they’re able. Others cannot compete for first place, but you’ve helped them to maximize their abilities so they’ll be at a strong starting position when they enter next fall’s new marathon. Still others have injuries or disabilities and have needed special one-on-one assistance – like the blind man I saw at the race, hand on his running partner’s elbow. As coach, you either filled that role yourself or found the student a suitable helper.

Playing a role in the marathon was exhilarating while I was on the bridge, but later that day I wondered if my being there really mattered. Surely, you’ve felt that, too – especially if you’ve witnessed a student falter or drop out of the race altogether. But many marathoners have since told us that they could not have finished without us – that our cheers were what kept them going to the end.

Depending on where you teach, you may not hear back from your students, but the principle is the same: You have made a difference in kids’ lives this past year, and the vast majority have finished the race because you were there.

Way to go, Teacher! You did it!