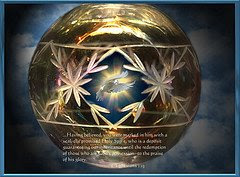 This morning, Rachel, my seven-year old, threw a fit, devastated that her sister wouldn’t play with her. Abbie wasn’t being rude, as Rachel suggested. Rather, she’d simply decided to play for a time with the two toddlers for whom I babysit; she’d promised to play with Rachel later. But, in addition to having her plans “ruined,” Rachel is extremely people-smart. So the thought of playing alone drove her to tears.

I was grumpy and didn’t feel well. And I wanted to get on with my own agenda for the day. So Rachel’s crying sounded like fingernails scraping a chalkboard. I wanted to yell but knew that would be wrong. Instead, I crouched in front of her, gearing up to deliver a low-volume but firm lecture about the inappropriateness of whining.

And then it hit me: the undeniable prompting of the Holy Spirit, saying, “Hold her. She needs comfort now.”

I love my daughter to pieces, but I’m at least as selfish as the next person. So I wrestled with Him, thinking, “But that’ll take too long! I just want her to be quiet and get over it. I have things to do.”

In response, all I heard in my spirit was, “Hold her.”

I still didn’t want to do that. But, after struggling a little longer, I sat on the floor and drew Rachel into my lap. I still wanted to set her straight but instead pursed my lips as she wailed.

Ten minutes later, she’d calmed down and was ready to move on. And – though I very often make wrong decisions in similar situations – I knew I’d made the right choice then, hard as it had been.

As Christ-followers, I think we often wonder if we’re deciding on a correct course of action. We want to do the right things – the Christ-like things. But how can we really know we have the mind and heart of God at any given moment?

For starters, we have to acknowledge and accept that we will often get it wrong. As the Apostle Paul lamented, we regularly do the things we hate and fail to do the things we know are right. We are becoming like Jesus, but we haven’t yet arrived – a condition about which we should give ourselves grace. Jesus doesn’t expect perfection, just a willingness to progress. And His grace covers all our flaws.

But we can know the right path, even if we too frequently veer from it. To do that, we must choose to listen for His still small voice in the midst of the noise around us (i.e., see 1 Kings 19:12). Whether or not we decide to obey, the voice is always there for those who’ve accepted Christ’s gift of salvation. We can discern His voice – as opposed to the enemy’s or our own desires – by comparing what it says to Biblical truths. Simply put, a prompting that agrees with Scripture can be trusted as God’s voice to you at that moment; conversely, any directive we sense in our spirits that contradicts the Bible is not from Him and should not be followed.

At times, Rachel does need correction about her whining. But this morning God told me she needed compassion. And, because I know the compassion He demonstrates throughout the Bible – as well as that which He’s lavished on me – I could trust at that moment to obey that command.