The Zach in Your Life 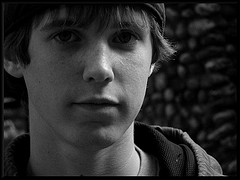 If you’re a long-time Authentic Hope reader, you may recall that last winter I taught a class on King Lear to a group of homeschooled teens. I wrote here twice then about Zach, a 13-year old in the class. Zach could do the coursework, but didn’t want to put in the time or effort to do well – an issue that, according to his mom, he also had with most academic pursuits. Zach was satisfied with mediocrity.

Zach eventually took seriously the standards to which his mom and I held him regarding the class – enough so that he turned a low F into a solid C by the end of our time together. But I hadn’t seen Zach since and wondered about him. Then I received this email from Zach’s mom:

…thought I would drop you a note to let you know that your class on Shakespeare really got [Zach] interested, to the point where he is auditing a [university-level] online course on two comedies of Shakespeare! Amazing! I am…pleased he is so motivated and interested.

Amazing is right. I’m honored that something I said or did apparently lit a fire in Zach, at least for Shakespeare. Hopefully, that motivation is transferring to other areas.

Do you have a “Zach” in your classroom? in your home? If so, what can you do?

Simply put, be like Zach’s mom. She struggled against Zach’s lack of motivation for years. But she never gave up on him. Instead, she first evaluated the problem to rule out learning difficulties. Then she set the academic bar at the right level for Zach and kept it there, no matter how he tried to weasel out of her expectations. It would have been much easier on her to let him “settle,” but she stuck with it for his sake.

And all the while she loved him. She continually assured him that – even when his behavior disappointed her – he himself was cherished. No matter what. Finally, she’s offered Zach new learning opportunities, such as the Shakespeare class, knowing that a breadth of experiences will help a child to eventually find his strengths and passions.

Zach’s not “out of the woods” with his issues; in all likelihood, he still prefers to avoid hard work in plenty of areas. But he’s making progress. And from that we learn another bit of wisdom from Zach’s mom: praise and reward growth – in contrast to expecting perfection. Demands of perfection paralyze, but a child who realizes that you notice and appreciate his efforts to improve will keep trying. And that will bear fruit.