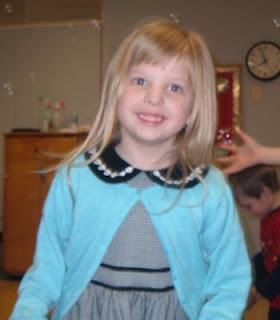 I homeschool our two daughters. Abbie is four, and Rachel started kindergarten this fall. I work hard to avoid labeling their learning strengths and weaknesses, as they are simply too little to know much of that with any certainty. But sometimes it is impossible to miss the clues.

This morning, Rachel delighted to comply when I asked her to count by ones to 79. She bounded into the kitchen to inspect our wall-mounted number display. Then she counted and, as she hit the 20’s, she began hopping as she said each number. At the 30’s, she started skipping around the kitchen table. When Rachel does this task sitting down, she gets mixed up a few times; today, she didn’t miss a digit.

Fast forward to lunch. As on most days, Rachel exclaimed, “Let’s talk!” It matters little what we talk about: a movie or book, an outing, a recent dream. She simply needs to verbalize the myriad ideas in her head and even, as Kathy says, enjoy the feel of the words in her mouth.

In the afternoon, she plopped onto the couch with a favorite book, telling herself the information she’d memorized from previous read-aloud sessions. Later, she described to me the intricate biography she had just imagined for the Transformer doll in her hand; for her, it was as important to tell the ideas as to think them up in the first place.

At one point, she broke from her monologue to turn on the CD player. Then she improvised some choreography for herself and the Transformer and belted out Hark! The Herald Angels Sing as she leaped and spun.

I noticed Rachel’s body-, word-, and music-smart abilities today because I’ve already seen them in many ways, even from her infancy. Of course, God is still developing much of this, so I cannot see a final picture of who she is being formed to be.

While Rachel is a unique creation, in one sense she is not unique. Like her, each child has been given a specific, wonderful mix of the eight intelligences. What an honor we have as parents and educators to witness the day-to-day unfolding of God’s plan in them!